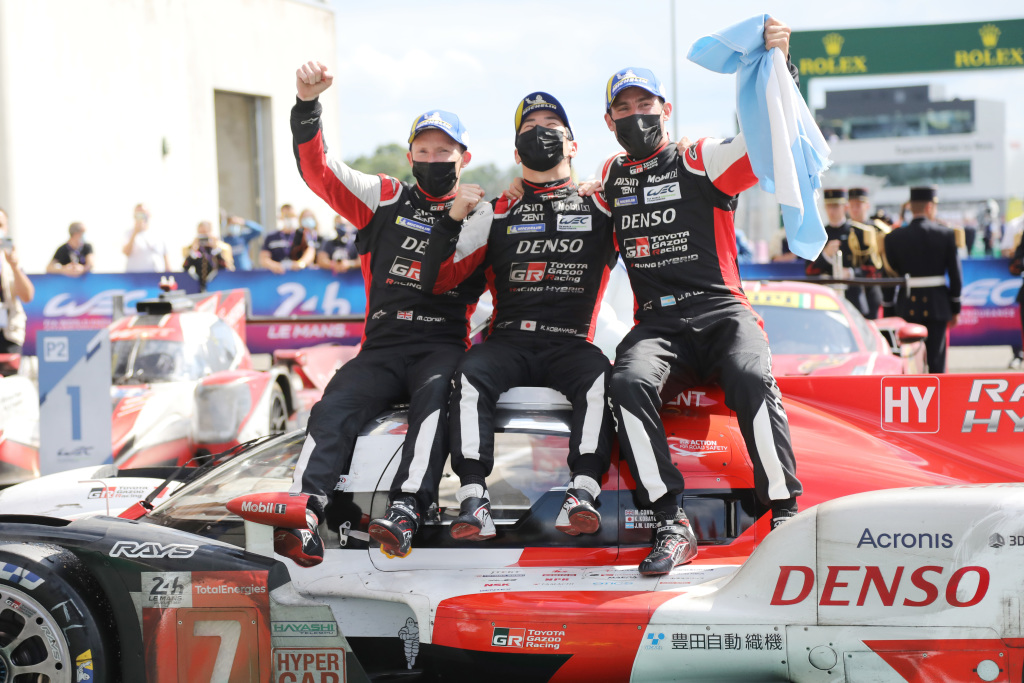 The No. 7 Toyota in the hands of Conway, Kobayashi & López triumphed at Le Mans 2021 in a race affected by temperamental weather. Much to the pleasure of the endurance racing family, the fourth round of the FIA World Endurance Championship took place before a crowd of 50,000; the maximum authorised in current circumstances. The Toyota GR010 HYBRID will go down in history as the first Hypercar to win the 24 Hours of Le Mans

Random downpours affected proceedings early on at Le Mans 2021. With restricted crowds happily back at the track to witness the dawn of the Hypercar era, the 24 Hours of Le Mans was true to form – a gruelling test of mechanical and human resilience. Of the 61 cars at the start, 44 crossed the finish line at 16:00 on Sunday.

For their first 24-hour race, the Hypercars streaked ahead of the rest of the field, displaying impressive reliability and consistency. Rapidly putting the incidents in the early stages of the race behind them, the Toyotas gradually forged a comfortable lead. Untouchable throughout the night, the Japanese cars settled in for some sibling squabbles, hustling around within seconds of each other. Lagging several laps behind, Alpine and Glickenhaus could only dispute third place. The French team won that battle when Glickenhaus fell foul of mechanical issues as the day dawned.

Competition is always tight in LMP2 but this year Team WRT went from excitement to bitter disappointment in the space of a lap. Having dominated the race in spectacular fashion the Belgian outfit was poised for a one-two finish when the No. 41 car, in the hands of Robert Kubica came to a halt. The No. 31 held off Blomqvist in the No. 28 JOTA in a memorable dash to the line. Panis Racing took third place.

The LMGTE Pro class often provides spectacular sporting entertainment and this year was no exception, with an epic head-to-head between Ferrari and Corvette. After 24 hours, there were only 42 seconds between the AF Corse No. 51 Ferrari 488 GTE and the Corvette Racing No. 63 Chevrolet Corvette C8.R, on its maiden Le Mans! The Pier Guidi/Calado/Ledogar crew admirably resisted the Corvette onslaught to give the Ferrari chairman and Le Mans 2021 starter John Elkann the result he hoped for. The Italian firm has announced its return to the top class of endurance with a Hypercar entry in 2023!

AF Corse claimed two class wins at Le Mans 2021. The team founded by the 2020 Spirit of Le Mans awardee Amato Ferrari drew on its wealth of experience to stay ahead of the TF Sport No. 33 Aston Martin. Rookie Callum Ilott and his teammates take third place with the Iron Lynx No. 80 Ferrari 488 GTE Evo.

The Le Mans 24 Hours will return to its normal June slot in 2022. The race dates are confirmed as the 11th – 12th June 2022. You can book your travel, tickets and camping options now by calling Travel Destinations on +44 1707 329988. Further details are available on this here.