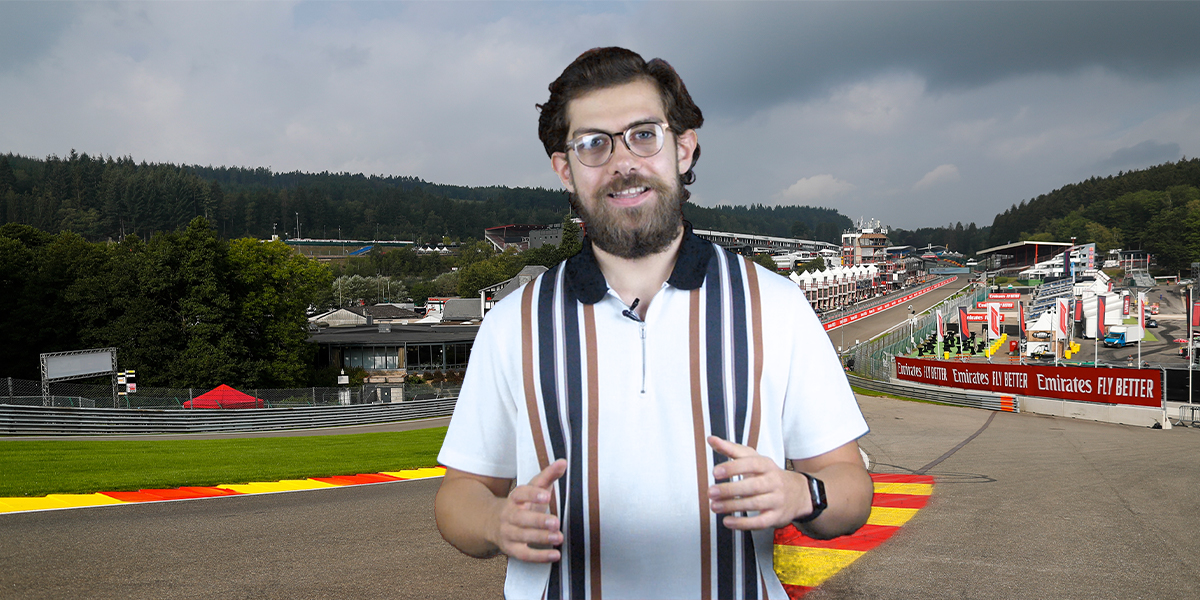 The Belgian F1 Grand Prix is one of the highlights of the motorsport calendar. The world’s most talented drivers take the fastest cars on the planet around this unique, treacherous circuit. It really is a sight to behold.

Every year, this race gives us some of the best racing action. From flying qualifying laps on Saturday, to head-to-head battles on Sunday, this is a Grand Prix weekend that has it all.

But that’s not the only reason you should be booking a ticket to Spa.

From the race’s unpredictable moments, to where you’ll be staying, and even making your journey a part of your experience, there are countless reasons why you should be making a trip to Spa.

But we’ve been tasked with narrowing it down to just five. Click below to watch the video, then click here to book Belgian Grand Prix tickets. You know it makes sense…

They don’t make tracks like this anymore. From the iconic Eau Rouge and Radillon, to the chaotic La Source, this track has it all. Every year, Formula 1 drivers come to the Belgian Grand Prix to push their machines to the limit. It’s what makes Spa one of the great venues for a F1 race.

The weather can catch the drivers out at Spa, as this tricky track becomes a slippery circuit. Be sure to pack a poncho, but don’t hide for the rain for too long. If there’s water on the track, it will lead to some unmissable action.

Turn your Grand Prix weekend into a week of discovering Belgium. Within less than three hours of leaving Folkstone, you could be in Bruges kicking off a trip that takes in Ghent, Antwerp, Brussels, and Leuven – the home of Stella Artois – before reaching the race. An epic way to experience the country.

You can read more on our Belgium road trip guide post here.

Camping and glamping at the Belgian F1 Grand Prix

Spa itself is quite a small town, so most racegoers elect to camp. A bunch of the world’s biggest F1 fans, in a field with nothing to do but drink and talk racing… what a shame!

Of course, for those who prefer to keep their hands clean, glamping is also available. Free WiFi, bacon sandwiches, tents you don’t have to put up yourself, this is five-star living.

Check out all the accommodation options at the Belgian F1 Grand Prix now.

The Belgian Grand Prix has given us some legendary battles between the world’s finest drivers.

Who could forget Michael Schumacher and Mika Hakkinen going wheel-to-wheel down the Kemmel Straight, around either side of Ricardo Zonta in 2000? Even in 2019, Charles Leclerc and Lewis Hamilton put on a real show as the young Ferrari driver claimed his first Grand Prix win.

There’s something special about Spa, and the drivers know it.

Click to book tickets to the Belgian F1 Grand Prix

Will Longman 9 October 2020
SHARE THIS POST
Popular posts
British F1 Grand Prix quiz: How well do you know Silverstone? Kanato Le: Why I left Japan alone at 13 to race in the UK Portugal F1 Grand Prix: 5 reasons to be at the race in Portimao F1 records: Test your knowledge on iconic moments Quiz: Can you match the racing circuits to their flags? Lewis Hamilton: His F1 career broken down season-by-season

Will Longman
9 October 2020
Popular posts
Formula 1
British F1 Grand Prix quiz: How well do you know Silverstone?
Home of the British Formula 1 Grand Prix, test your knowledge of the legendary Silverstone circuit with this interactive quiz.
Insight
Kanato Le: Why I left Japan alone at 13 to race in the UK
Go-karter Kanato Le on why he decided to leave his homeland of Japan alone at the age of 13 to go racing in the UK and Europe.
Formula 1
Portugal F1 Grand Prix: 5 reasons to be at the race in Portimao
For the first time, Portimao will host the Portuguese Formula 1 Grand Prix in 2020. Here's why you need to book tickets for this tantilising race.
Formula 1
F1 records: Test your knowledge on iconic moments
Test your knowledge on F1 records, including most overtakes, youngest driver to score points, top F1 car speed, largest winning margin and more
Formula 1
Quiz: Can you match the racing circuits to their flags?
Think you're a motorsport buff? Test your knowledge by matching the maps of the circuits to the flag of the country you'd find it in.
Formula 1
Lewis Hamilton: His F1 career broken down season-by-season
Check out this comprehensive history of Lewis Hamilton's career in Formula 1 with a brief synopsis of every season so far.
Consumer Protection
Accepted Payment Methods