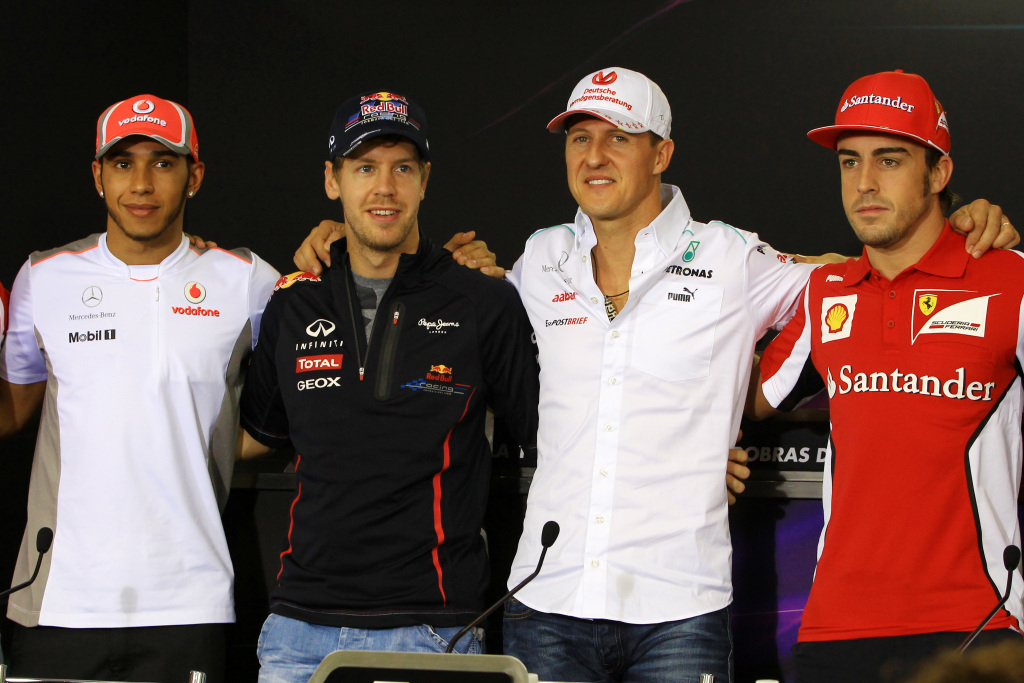 Motorsport is all about pushing yourself and your car to the absolute limit. Over the decades, Formula 1 records have tumbled as drivers pushed harder, engines became more powerful and cars became faster.

Achievement in F1 is spread between teams and constructors, and drivers. Over decades in the sport, teams like Ferrari, McLaren and Williams have broken Formula 1 records with consistently quick cars and the fastest drivers.

But inside the cockpit, certain drivers have applied themselves to break personal Formula 1 records. Michael Schumacher and Lewis Hamilton top many of these tables – and we’ve already compared how the two shape up against each other. Watch our video here.

Here, you will find the Formula 1 records for most championships race wins, pole positions, race entries for both teams and individuals. If you want to know more about the youngest drivers to win championships, races, points and podiums, read our article here.

As of the 2021 season, Lewis Hamilton and Michael Schumacher are tied with seven titles apiece. The German was dominant at the turn of the century, winning five titles on the bounce from 2000 with Ferrari. These were in addition to his double world championships with Benetton in the ’90s. It was a record that looked unassailable. However, Lewis Hamilton and Mercedes’ dominance in the hybrid era turned the motorsport world on its head. Hamilton replaced Schumacher at Mercedes after the German’s retirement at the end of 2012. Since then, Hamilton has only failed to win the championship on two occasions: his first Mercedes season in 2013, and 2016, when he lost out to teammate Nico Rosberg. Those six titles, along with his maiden championship in his second season with McLaren, make him the joint-most successful driver ever.

Juan Manuel Fangio’s record of five titles in the 1950s stood the test of time. The first great driver of the Formula 1 era, he finished 1st or 2nd in the championship in the first seven seasons he entered. His record stood until 2003 when Schumacher clinched his 6th title. Alain Prost’s battles with Nigel Mansell, Ayrton Senna and Nelson Piquet earned him four titles. As did Sebastian Vettel’s absolute dominance with Red Bull in the early 2010s.

As the longest-serving team in Formula 1, it’s no surprise to see Ferrari sitting atop the Constructors’ Championship table. Omnipresent in Formula 1 since its first season in 1950, the Scuderia has become a symbol for the sport. But it’s one thing to turn up to every race, it’s another to win them. For decades, the Scarlet Red Ferrari has been at the front of the grid, and it has won the Constructors’ title 16 times, along with producing the Drivers’ champion on 15 occasions. Its’ world champions include Alberto Ascari, Juan Manuel Fangio, Mike Hawthorn, Phil Hil, Niki Lauda, Michael Schumacher and, most recently, Kimi Raikkonen.

There’s a gulf between first and second in this list. Williams has been present in Formula 1 since 1977 and took its nine titles throughout the ’80s and ’90s. Keke Rosberg, Alain Prost and Damon Hill are among some of its driver champions. McLaren’s won the constructors’ title on 8 occasions, but produced the drivers champion 12 times, including Lewis Hamilton. He tied up six of Mercedes’ seven titles, with teammate and rival Nico Rosberg taking the other.

When he first stepped into a Formula 1 car, the paddock knew this guy was special. But when he took his first victory in Canada in 2007, no one expected what would follow. Lewis Hamilton has stormed to a record 99 victories, and is expected to be the first driver to break triple figures in 2021. An extraordinary feat: not only to amass such a number of wins, but to win a race in every season of competition.

Schumacher’s 91 wins came mostly with Ferrari, including a near-perfect year in 2002. He took 11 victories, five 2nd place finished and a single third place. Sebastian Vettel’s record with Red Bull and his title pushes with Ferrari earn him third-spot, just above former McLaren teammates Prost and Senna.

In terms of pole positions, there’s a clear winner. Lewis Hamilton is the first driver to reach triple-digit pole positions. He secured his 100th pole position at the Spanish Grand Prix in 2021. With less than 300 starts under his belt, it means Hamilton has taken pole position in more than one-third of the races he has entered. His nearest rival is Michael Schumacher, but with 68 pole positions, it doesn’t come close to the British driver’s total.

However, Schumacher’s 58 pole positions for Ferrari place the Scuderia at the top of this table. Their last pole position came courtesy of Charles Leclerc, who nabbed pole from around his home track at the Monaco Grand Prix. They are the only team to reach the 200 pole positions mark.

Of course it’s Kimi Raikkonen. The Finnish driver has been in Formula 1 since 2001, and despite taking two years out to race in rally and NASCAR, he remains the longest-serving F1 driver. With 339 starts in Formula 1’s 1,045 races, he has competed in 32% of all F1 Grands Prix. In the 2021 season, he is set to cross the 33% mark. But with Fernando Alonso’s return to the sport, and his Alpine contract taking him to 2022 and possibly beyond, should Kimi retire in 2021, the Spaniard will be hot on the Flying Finn’s heels.

There are only 25 races Ferrari has not entered in Formula 1. The majority of these were Indianapolis 500 races in the 1950s, and it has entered every Grand Prix since the 1976 Austrian Grand Prix.

Highest attendance at a Formula 1 weekend

The first British Grand Prix to be held at Silverstone since the COVID-affected season of 2020 attracted a record number of fans. 365,000 people attended the race over the weekend of 16 – 18 July. Silverstone regularly attracts around 360,000 fans, while the Mexican Grand Prix and Canadian Grand Prix also attract similar numbers.

Book tickets to Formula 1 races across the world with Motorsport Tickets to see history in the making.