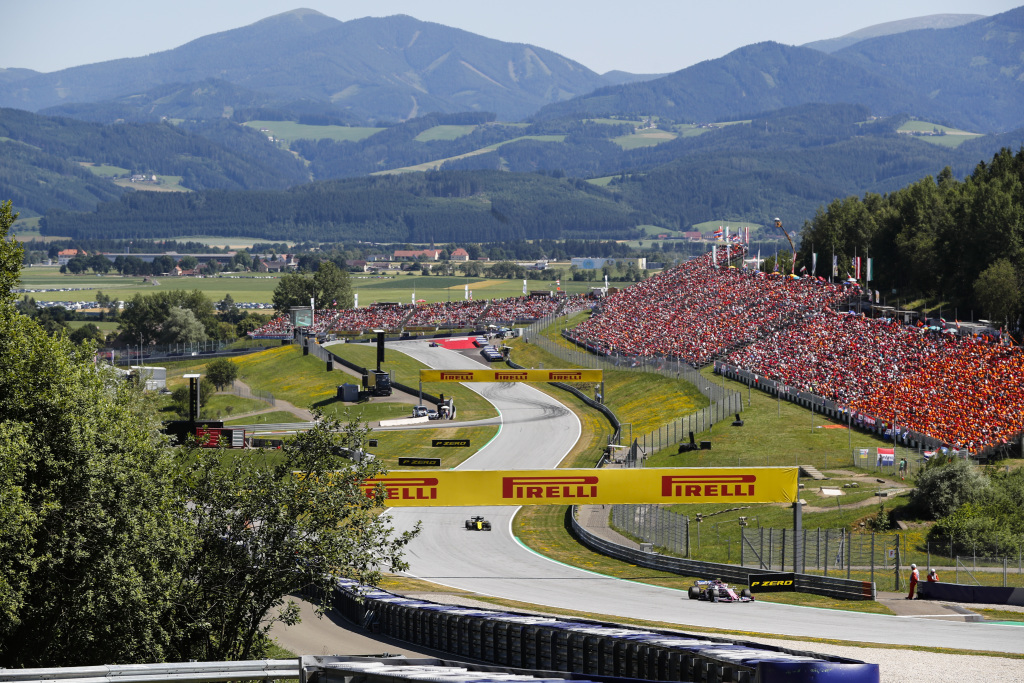 Austria F1 Grand Prix: Where are the best places to sit?

Will Longman 9 July 2020
Looking to book tickets for the Austria Formula 1 Grand Prix? Our seating guide will give you a head start on all the grandstands at the Red Bull Ring.

High up in the Styrian Hills, the Austria F1 Grand Prix provides the scene for what might be the most picturesque race on the Formula 1 calendar. But with a track distance of just under 5km, it’s also one of the quickest laps of the year – though that doesn’t mean there isn’t plenty of action to witness trackside.

In fact, thanks to its elevation and layout, fans at the Austria F1 Grand Prix can witness more of the race from a single grandstand than most other circuits, meaning you’re less likely to miss any action.

While there’s comparatively few grandstands compared to other circuits on the calendar, there are plenty of vantage points throughout the circuit which place you in the midst of the action.

If you’re looking to book tickets to the Austria Formula 1 Grand Prix, here’s what you need to know about the seating situation.

Located just after the tight turn one, the Red Bull Grandstand runs alongside the long straight as the cars climb to the highest point on the circuit. Here, you’ll see the most action as the cars tussle for position after traversing the start. You’re also right by the pit exit, so you’ll be the first to know if a team has pulled off its pit-stop strategy to perfection.

What’s more, given Austria’s track layout curls back on itself, you have a clear view of turn six, seven and eight as they transition from sectors two to three. In terms of track action, there probably isn’t a spot at any circuit in the world where you’ll see this much of the race unfold. It’s handily located right by the F1 Village, and has clear views to two big screens to catch all the on-track moves.

Named after the region of Austria the track is in, this grandstand is situated just behind turn one. From here, you’ll have a good view of the grid for the start, and be able to see the carnage unfold at turn one. Who could forget Fernando Alonso and Max Verstappen colliding in 2018 to the palpable disappointment of the latter’s legions of Dutch fans (spoiler: he more than made up for it the following year).

After the start, the cars will be ploughing down the pit straight at around 330kp/h, but you’ll be in a prime position to see who’s latest on the breaks as the cars slow to take the first bend.

Like with the Red Bull Grandstand, there’s also a good chance to see the cars later in the lap. You will see them venture up the hill to turn three, and then again as they make their way back down through the lap at turn six.

This is a great spot to experience the race, with the F1 Fan Village and bars nearby, meaning you’re as close as you can get to a Formula 1 track with a pint in hand, and a big screen directly opposite so you won’t miss a moment.

The biggest grandstand on the circuit, the myWorld Grandstand stretches the length of the pit straight. While you’ll experience the deafening adrenaline rush of 20 Formula 1 engines revving in unison as the lights go out for the start, it’s a perfect spot to watch qualifying, as the cars will reach a blistering 313kph as the cross the line to begin their qualifying lap on Saturday.

It’s also a great vantage point for off-track events. Before the race, you’ll soak up the grid atmosphere, spotting the celebrities and TV crews during the grid walk as the teams and drivers get in the zone, and then post-race, you’ll bask in the glory of your winner, as the podium faces the east-end of this grandstand.

Austria very much as a rough-and-ready festival vibe to it. Dropped in the middle of the Austiran mountains with little in the way of the swank and luxurious accommodation other circuits have to offer, you’ll probably pitch up a tent in a campsite for your stay, party through the night at one of the many makeshift bars near the track, and by day, you’ll be awoken by the glorious moos of the local cattle.

For this reason, racegoers are more than happy to pop-up a camp chair on a grassy verge and enjoy the race from one of the wildly popular general admission spots.

Green general admission tickets will get you access to the highest point of the track, along the back straight of the circuit. If you are sat towards turn three, you’ll have a prime view of a major overtaking zone. Just ask Max Verstappen who bumped Charles Leclerc off the track in 2019 to take victory (told you he’d make amends…). If you’re sat towards turn four, you’ll be at the end of the second DRS zone, as drivers will battle to be last of the late breakers. As you’re at the highest point, you’ll also get a great view of rest of the track as the pack moves through a lap.

These areas are for the diehard racing fans who aren’t worried about luxuries and just want to see some racing, whatever the weather (which is usually pretty hot).

Want to know more about the action on track? Read Autosport’s report from the 2020 Austria F1 Grand Prix.