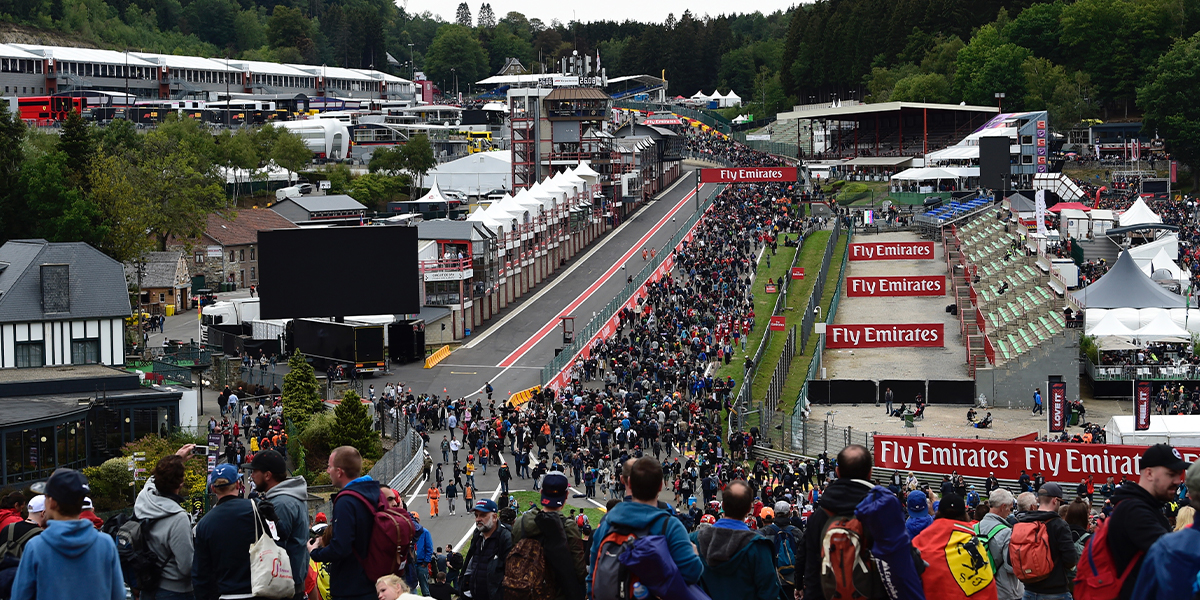 Belgian Grand Prix: Five reasons to be at the race at Spa

Will Longman 14 January 2021
The Belgian Grand Prix takes place at the legendary Spa circuit and is a bucket list race for F1 fans. Find out why you should book tickets.

The Belgian Grand Prix is one of the highlights of the Formula 1 calendar. This epic 7km circuit is one fans and drivers alike love to race at.

With a handful of the greatest corners on any circuit in the world, and conditions that change at the drop of a hat, racing in Belgium is as unpredictable as it gets.

Found deep within the Ardennes forest, those that make the journey to the Belgian Grand Prix generate an atmosphere that is second to none.

As we prepare for the next Belgian Grand Prix, read our five big reasons why you should book a ticket for the race.

5 reasons to book a ticket for the Belgian Grand Prix

The Spa-Francorchamps circuit dates back to 1925, when it was a massive 15km circuit with lap times clocking in at 5 minutes minimum. The old circuit was formed on public roads through the Ardennes forest, linking the towns of Francorchamps, Malmedy, and Stavelot.

While the modern 7km track is significantly shorter, it’s no less challenging nor exciting.

The undulating nature of the Belgian forest gives this track a wealth of character. The treacherous and iconic uphill Eau-Rouge and Raidillon is counter-balanced by the downhill Malmedy and Rivage. Both prove monumental challenges for the best drivers.

Spa features some of the world’s greatest track designs, too. From the start, the cars burst towards the hairpin of La Source, where so many drivers have fallen victim on lap 1. Fernando Alonso has been involved in at least two first corner incidents at Spa. And carnage rained down in 1998, when 12 cars were taken out before the second corner.

Pouhon is also a fan favourite. This sweeping double left-hander separates the good from the greats. Full committal is required as the drivers take this turn at 290 km/h. Another example of the bravery required to hook up a lap at Spa-Francorchamps.

The beauty of Spa is that you really never know what conditions you’re going to get. It’s a regular occurrence for the rain to be hammering down at one part of the track, and the sun shining in another. This not only mixes up the strategy, but tests the drivers to the limit.

Just ask Kimi Raikkonen. He was leading the race from Lewis Hamilton in 2008, and just a few laps from victory. But while the first sector was bone dry, the rain started coming down in the last few corners. Having just been passed by the Brit, he was keeping his Ferrari in close contention with the McLaren.

However, as he approached the bus stop chicane, the Finn was caught out. He lost control of his car and span into the wall. Lewis took the victory – until he was awarded a controversial post-race penalty (but we won’t get into that here…)

Spa-Francorchamps location deep within the Ardennes makes it a picturesque, remote location to go racing. Those flying to the nearest city Brussels will jump on a train, coach or hire a car to make the final stretch.

But for those who would rather make their own way, loading up the car for a road trip might be the best option. The journey from Calais to Spa is 3 hours and thirty minutes – that’s the same journey time from London to Sheffield.

Driving to the race brings a wealth of benefits. The flexibility of making your own way their on your own watch means you could explore some great Belgian towns. Bruges, Ghent, Antwerp and Brussels are all stops you could make on the journey. Check out our road trip itinerary to find out what each city has to offer.

It also means you can travel with more. There are some lively campsites full of motorsport fanatics at Spa. While we offer camping and glamping packages, a seasoned camper would be able to take all their gear to the race. Check out our camping packages to find the right stay for you.

Sooner or later, every F1 fan will consider the pilgrimage to Spa. It’s a track that showcases the best the sport has to offer, and has been the scene of some legendary wins.

So much so that the atmosphere at Spa is palpable. The majority of the grandstands are located around the first few corners – La Source, Eau Rouge and Raidillon – and the pit straight. The energy at the circuit as the cars plough through the circuit is second-to-none.

Later around the circuit, grandstands at Pouhon are a fan favourite. With many of those with general admission tickets gathering around the corner, everyone is after an opportunity to see the cars at their fastest.

Another good spot to see the cars flat-out is the Kemmel Straight. A tall grass verge lines the length of the straight, which many in general admission will choose to see some slipstream action.

Such a varied and complex circuit always invites epic battles between the world’s great drivers.

One memorable moment came between Mika Hakkinen and Michael Schumacher in 2000. The two drivers were fighting for the lead of the race, and just four laps remained as the drivers approached the Kemmel Straight. They quickly closed in on Ricardo Zonta, who was set to be lapped by the leaders. As Schumacher veered left to take the racing line past Zonta, Hakkinen dived to the right. Both cars passed Zonta simultaneously in an incredible move, which gave him the inside line to the next corner at Les Combes and, ultimately, the lead of the race.

In more recent years, Charles Leclerc’s first every victory came in Spa in 2019. But he had to work for it. Leclerc led from pole, but world champion Lewis Hamilton closed in on the Monegasque to challenge for the lead. A tense battle saw Leclerc hold on to victory by less than a second. It was a fine example of the brilliant racing the Belgian Grand Prix produces.

For more, watch our 5 Reasons To Be at The Belgian Grand Prix video