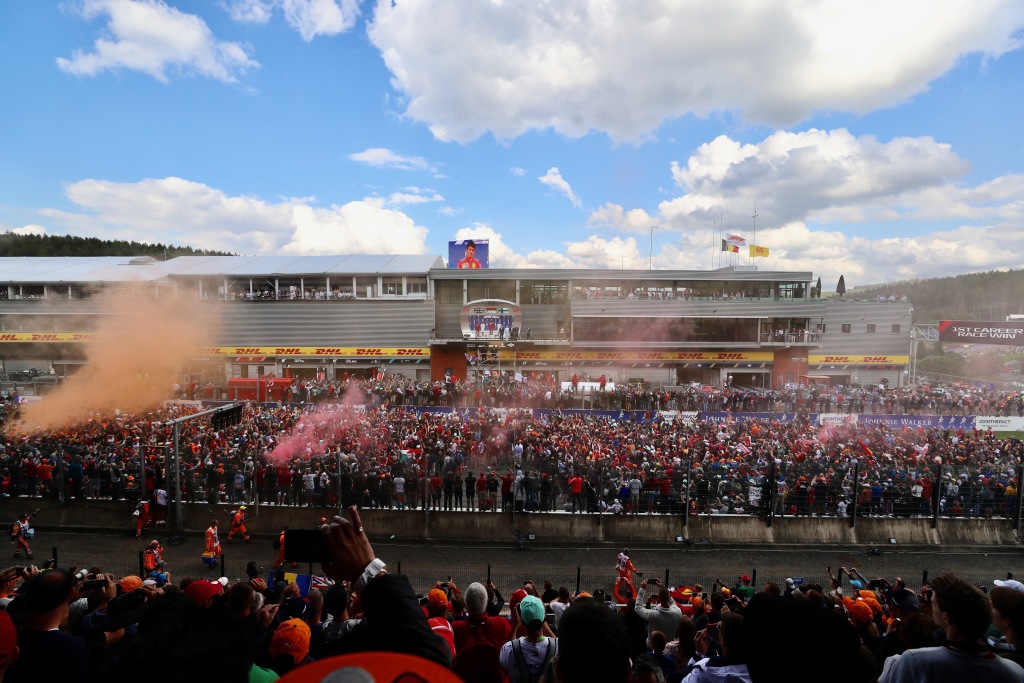 Belgian Grand Prix: Where are the best places to sit at Spa-Francorchamps

28 Jul 2020 Will Longman
Looking to buy tickets to the Belgian Grand Prix? Here's all you need to know about where you can watch the iconic race at Spa-Francorchamps

The Formula 1 Belgian Grand Prix is one of the highlights of the F1 calendar, with some of the most challenging complexes of any circuit in the world. From the treacherous uphill battle with Eau Rouge to the fast corners at Pouhon and Blanchimont, or the tight, slow chicane and hairpins, it’s a circuit that has it all, and drivers have battled for decades to conquer it.

Spa is a drivers’ circuit, and a must-see bucket list race for any hardcore motorsport fan. Hundreds of thousands of them make the racing pilgrimage to the Ardennes Forest every year to camp for the Grand Prix weekend and relish the atmosphere.

As the longest circuit on the calendar, not only does Belgium offer a wide array of variety for the drivers on track, it means fans have a huge selection of vantage points to watch the race, and sites to set up camp and relax after a session.

If you’re looking to buy Belgium F1 Grand Prix Tickets but don’t know where to sit, here’s our handy guide to the grandstands and general admission options available to fans and what they each offer.

The majority of grandstands at Spa-Francorchamps are situated around the main straight, the hairpin first turn that proceeds it at La Source, and the majestic complex of Eau Rouge and Radillon.

If there was an award for ‘Most Carnage Witnessed by a Grandstand’ in Formula 1, Grandstands Gold 7 and 8 would win by a mile. Placed right on the corner of La Source, spectators here see the cars charge towards them from the grid, hit the braking zone and turn through the first corner before leading the procession towards Eau Rouge.

In 1998, the race was restarted after one of the biggest pile-ups in F1 history, with over half the grid caught up in a huge crash. In more recent times, Fernando Alonso’s McLaren flying over Charles Leclerc’s Alfa Romeo at La Source provided one of the iconic images of the modern sport.

Always unpredictable, there’s nowhere on the circuit heartbeats will be pumping faster than these stands at the start, and there’s a huge screen right opposite to watch the rest of the racing action.

Once – and if – the cars make it through La Source, they begin to storm towards the uphill complex. From these grandstands, you’ll see the cars swing round and accelerate out of Turn 1, storm past the pit exit and power through the elevation of Eau Rouge. Budding photographers in these stands will have a clear view of the cars on the approach up the hill, and will return home with some stunning photos.

Another benefit to these stands are they are well placed to see the cars exit the pit, so you’ll be the first to know if a team has pulled off an all-important under- or over-cut during the pitstops, which can make all the difference on such a long circuit.

These two grandstands form an Eau Rouge sandwich. You’ll be right in the midst of the corner as the best drivers in the world are mid-way through tackling one of the most challenging rotations of a steering wheel they’ve ever encountered.

From these stands, you will see the cars exit the pit land and speed towards their ascent, and then drive over the crest at Radillon to tackle the rest of the circuit.

As the lap draws to a conclusion, the drivers tackle the ‘bus stop chicane’. A prime overtaking spot, this is the closest and clearest view you can get to the cars at the Belgian F1 Grand Prix. The final two corners before a short burst towards the finish line, it’s one of the hardest braking zones with the drivers decelerating from 315 km/h to 65km/h. These speeds mean it’s a great spot to take a photo of the cars as they navigate the chicane, and see if anyone is brave enough to stick their car down the inside.

It also provides a clear view of the pit entry, so great for any tactical gurus who want to see which team is going to pull the trigger on an undercut.

There’s nothing like the roar of 20 F1 engines lining up on the grid, waiting to unleash a collective 19,200 horsepower. That’s a thrill you’ll experience at Grandstands 1 Pit and 9 at Spa-Francorchamps. From this point, you’ll see the cars start the race, witness the world-class pit crews do their thing, and cross the finish line.

These are the only grandstands you will have a view of the podium celebrations after the race, so there’s no rush to join the crowds down below. Just sit back, and let the champagne flow.

Further along the circuit at the Formula 1 Belgian Grand Prix, grandstand S3 provides a prolonged view of the cars as they speed round the long left-hander at Pouhon. The cars brake to 195kph as the enter turn 10, and accelerate up to 310kph by the time they’ve exited on their way to turn 12.

The silver 3 grandstand is removed from the stadium feel of the stands situated at earlier points throughout the circuit, and is surrounded by general admissions areas, so the atmosphere is electric. It also has a big screen directly opposite to keep up with all the action throughout the race.

There are vast general admission zones around the Spa-Francorchamps with great access to this legendary circuit. While they are an ecominic way to watch the race if you’re on a budget, they mostly consist of grassy banks, so you’ll have to bring a fold-up chair or blanket to sit on. None of the general admission areas are covered, either, so make sure you’re adequately prepared for the elements Belgium might have in store for you.

After the onslaught of La Source, Eau Rouge and Radillon comes the Kemmel straight, which is lined with fans along its entirety. The first DRS zone on the track, this straight is wide enough for the cars to line up four-wide, and at around 1km, it’s long enough for to provide a massive slipstream advantage making it a key overtaking zone.

The next general admission area flows inside the circuit from turn 8 all the way through to turn 13 as the cars take on the technical sector two.  There are a few grandstands along this section, but there are plenty to big screens along the track.

The third general admission zone for bronze ticket holders lies along Blanchimont, one of the fastest sections of the lap as the cars speed through a slight left-hander towards the final chicane. A great spot to witness the speed of these cars, but blink and you’ll miss them!