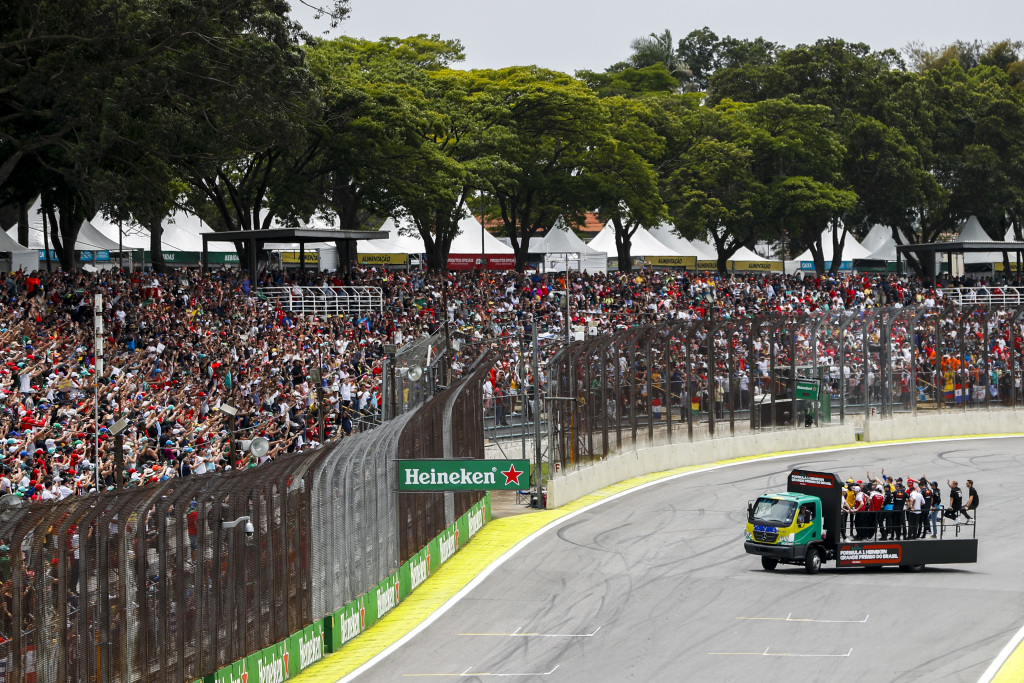 The Brazilian Grand Prix returns to Formula 1 after a two-year absence in 2021. And the legendary circuit which has been the scene of so many title-defining moments could prove vital in the 2021 championship.

Straight off the back of a race in Mexico, title protagonists Lewis Hamilton and Max Verstappen will be aware that every point counts. But the Brazilian Grand Prix has proved unpredictable so many times before, and the last race in Sao Paolo was one of the most exciting of the 2019 season.

We’ll have fans in the stands to witness what could be a pivotal race in the title battle. Make sure you’re on top of all the action with session times, support series, weather forecast and the latest news from the weekend, check out this guide with all the information you’ll need.

Fans attending the race from abroad should be aware it is necessary to present a negative PCR test 72 hours before flying, or an antigen test 24 hours prior.

For an interactive map of the circuit and drections to the track, click here.

Brazil is on Brasilia time, which is three hours behind Greenwich Mean Time. So the race begins at 2 pm in Sao Paolo, and 5 pm in the UK. There is also the third sprint qualifying session of the year to look out for, which kicks off at 4.30 pm local time. That means traditional three-part qualifying shifts to Friday, beginning at 4.30 pm local.

The 2019 race saw temperatures around 20 degrees celsius, and a track temperature of 48 degrees. However, do not rule out the possibility of rain. The last wet Brazilian Grand Prix was in 2016, which was a treacherous race. Max Verstappen delivered a masterclass in the rain. The humidity in Brazil also affects the ability of the track to dry up, creating unique conditions should it rain.

Support series and subsequent timetables for the race in Brazil are yet to be confirmed. Check back later for updates.

The Brazilian Grand Prix circuit is one of those unique marvels on the F1 calendar. A short distance at just 4.309 km, Valtteri Bottas’ 1:10.540 in 2018 is the fastest a driver has ever raced around Autodromo José Carlos Pace. But this short circuit packs a big punch.

Turns 1 and 2 are known as the Senna ‘S’, a swirling downhill left-right sequence that starts with a sharp left-hand turn from the short run off the grid. This can create a concertina effect, with drivers fighting for position early on.

The exit out of two is crucial, as it sets the car up for the wide turn three and straight into turn 4. This is a DRS zone, so could be key for overtaking. Sebastian Vettel has had two memorable incidents here: in 2012 with the title on the line, he was spun around coming out of turn 4, but still managed to win the championship. And in 2019, attempting to pass his Ferrari teammate, he crashed into Charles Leclerc, taking them both out of the race.

After turn 5, the drivers embark on an uphill trek to the slowest section of the track. Turns 8, 9 and 10 are tight turns where overtaking can be made – but it’s risky.

The final sector sees the cars pick up speed after turn 12, onto the main straight which has three small left-hand kinks. This is the fastest section of the track, but has thrown up issues for drivers trying to pick up the speed in the wet.

For a taste of the Interlagos action, rewatch the Porsche Carrera Cup Brazil action from earlier this year on Motorsport.tv.

What happened at the last Brazilian Grand Prix?

It doesn’t get much more dramatic than the 2019 Brazilian Grand Prix. There were thrills, spills and everything in between in one of the most dramatic races of the season.

However, if you’d only caught the opening half of the race, you would be forgiven for thinking it was a processional race. Things really kicked off when Valtteri Bottas’ Mercedes had suffered an engine failure on lap 52 after following Charles Leclerc for a prolonged period. That brought out the safety car, which was timed perfectly for Max Verstappen. He was sitting ahead of Lewis Hamilton, boxed for new soft tyres, and emerged in 2nd behind the Mercedes.

Alex Albon did the same from 5th, in a bid to get the better of the Ferraris ahead of him. At the restart, both Red Bulls made charging moved into turn 1 – Verstappen taking the lead and Albon taking 3rd. That forced the Ferraris into racing each other for position, and it did not end well. Having been passed into turn 1, Sebastian Vettel looked to get back ahead of Charles Leclerc. He pulled out on the back straight, but veered into his Monegasque teammate. Both drivers suffered punctures and were forced to pull up on the side of the road.

That crash resulted in another safety car, bunching up the pack once again with just two laps left on the clock. From 2nd, Lewis Hamilton pitted in the hope a fresh set of tyres could see him speed ahead of Verstappen. He fell to 4th, but overtook Pierre Gasly in 2nd immediately. Attempting to overtake the first Red Bull ahead of him, Lewis made a move on Alex Albon at turn 12. Albon span, and Hamilton dropped down to third.

From here, the final lap and a half were a race between Hamilton and Pierre Gasly for second. With no DRS for the Mercedes, it was an all-out drag race between the Brit and Frenchman, who had unceremoniously lost his seat at Red Bull earlier in the season. Gasly came off the better of the two, scoring his first podium by less than a tenth of a second.

Lewis Hamilton would eventually receive a penalty for his clash with Albon, promoting McLaren’s Carlos Sainz to the rostrum for the first time.

How to stay up to date at the Brazilian Grand Prix