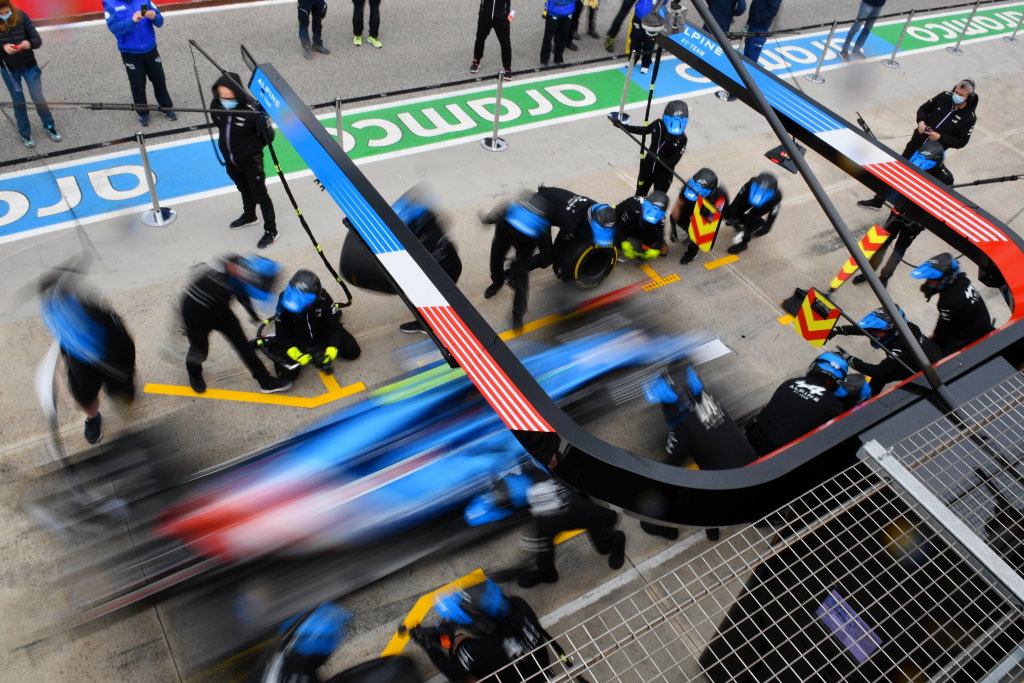 F1 pit crew: what each member does during a Formula 1 pit stop

23 Jun 2021 Will Longman
Find out what each member of an F1 pit crew does, how many members are in the team, and how to train to join a Formula 1 pit crew

Formula 1 pit stops are a crucial component of any Grand Prix weekend. During a race when fractions of a second can make all the difference, the prospect of stopping the car to change the tyres can flip a race on its head. That’s why an F1 pit crew plays such an important role in the team.

If you were to take your road car to the local garage to change a tyre, you’ll be waiting around for about 15 minutes. In a Formula 1 pit lane, all four tyres are changes in less than 3 seconds. Anything longer than 2.5 seconds is considered a long stop, but a stop under 2 seconds can buy you a couple of places on track.

So how do Formula 1 pit stops work? Find out how many members make up the pit crew, what each member does, and how you can work to join an F1 pit crew.

F1 pit crew: what they do during a pit stop

How many people are in a Formula 1 pit stop team?

More than 20 people make up the F1 pit crew. They are responsible for stabilising the car, changing the tyres, making adjustments to the aerodynamics, and safely releasing the car. Each team has one pit crew that services both cars throughout the weekend. That means across all ten teams, over 200 people are involved in the pit stops up and down the paddock. Each one has an important role elsewhere in the team, but trains to be a part of the pit crew.

What does each member of the F1 pit crew do?

Role: Operate wheel gun to remove and fit wheel nut
Number of crew: Four – one for each tyre

The role of the tyre gunner is to operate the pneumatic wheel gun. This loosens the nut that holds the tyre to the wheel of the car. It then tightens the nut back onto the wheel when the fresh tyre has been fitted. While they operate much like a wheel gun you might find in your local garage, these are supercharged and spin at more than 10,000 revolutions per minute. Each garage is prepared with eight guns, two for each wheel in case one fails.

The wheel gun is operated with compressed air or nitrogen to loosen the nut. Once the nut is loose, the gun automatically switches so the next time it is operated it tightens the nut back up. In the past, the gunner would signal that the wheel had been fitted by lifting a hand above the tyre. But modern guns now use an electronic system to signal that the tyre has been fitted. If a mistake has been made, the gunner makes an ‘X’ signal by crossing his arms in the air. This makes the team aware that an error has been made, and the car should not be released or should stop as soon as possible. An example of this was the 2019 Australian Grand Prix when both Haas cars retired when wheels were not correctly fitted.

Role: Remove the tyres
Number of crew members: Four – one for each tyre

A simple role, but an important one. One member of the pit crew is responsible for pulling the 10.5kg tyre off the car as quickly as possible. When the car approaches, the tyre off crew member along with the wheel gunner are poised on their mark. The driver must hit the mark precisely, otherwise, the eight members of the crew will have to re-orientate to complete their task, slowing down the stop.

Role: Bring tyres to the pit box and fit on to the car
Number of crew members: Four – one for each tyre

Once the tyre is off the car, it is the responsibility of four crew members to fit a fresh set to the car. When the call to pit is given, the pit crew will be instructed which set of tyres to fit to the car. This should be simple enough but can become confusing during double-stack pit stops, as was the case at the 2020 Sakhir Grand Prix when George Russell was fitted with Valtteri Bottas’ tyres.

It’s also vital to bring the tyres to the box promptly. At the 2016 Monaco Grand Prix, the four tyres on crew members were seen running to Daniel Ricciardo’s car while it was stationary, and the tyres had been removed. This error cost enough time for the Red Bull car to lose the race.

Once the car has had the tyres removed, it’s this crew members job to fit the tyre as quickly and smoothly as possible.

Role: Lift the front of the car in the air to allow the tyres to be changed
Number of crew members: Two

This member of the team uses a special piece of equipment to lift the car in the air from the front. They stand at the front of the pit box and slide the jack underneath the front wing of the car. By applying their weight to the handle, this lifts the car in the air. The car is held in this position while the stop occurs, and the front jack pit crew member moves to the side and out of the way of the car. When the stop is complete, the front jack releases and the car drops to the ground. The pit crew member then moves the front jack out of the way as quickly as possible.

There are two members responsible for the front jack: one main, and one spare. The spare is useful if a pit stop goes wrong, as happened to Racing Point in 2020. Lance Stroll’s car came into the box too hot and knocked the front jack crew member onto the ground, so the spare stepped in. Two front jacks may also be used in double-stack pit stops, with one member for each car.

Role: Lift the car in the air from behind
Number of crew members: Two

The rear jack is responsible for lifting the car from behind to allow the rear tyres to be changed. The rear jack is similar to the front jack, and slots onto the indicator light at the rear of the car. There is a backup rear jack in case of failures.

Role: Lift the car in the air from behind or operate the side jack
Number of crew members: Two

On a standard pit stop, this member of the team steadies the car. When the jacks lift the car from either end and off the ground, it destabilises the car. These two members hold the car as still as possible around the cockpit area. However, they have another important role. When the car picks up front wing damage and needs replacing, the front jack is unable to lift the car for obvious reasons. A side jack is then used in the middle of the chassis to lift the car and enable the tyres to be changed.

During a race, depending on track conditions, tyre wear, fuel depletion or driving style, the flaps on the front wing may need adjusting. The driver communicates this to his engineers in ‘turns’. The relates to the flaps adjust, where a screw is turned on the front wing by a mechanic with a drill. This will alter oversteer and understeer depending on the driver’s wishes. During wing changes, these members of the crew will assist with fitting the new wing.

Role: Give the signal for the car to be released
Number of crew members: One

In years gone by, this job was operated by a literal traffic lollipop. It would stop the driver, prepare them for launch, and release them from the box. In modern times, when all four tyres are changed, an electronic system indicates the car can be released. However, this doesn’t take into account traffic in the pit lane, or any other issues a pit crew might face. The lollipop man is responsible for finding a safe gap in the pit lane traffic, and ensuring the driver does not impede (or worse) another car on exit.

How to get a job as a member of a Formula 1 pit crew?

No member of a Formula 1 pit crew is employed to solely fill one of these roles. They are all mechanics and engineers with a wider role within the garage. Therefore, the best way to become a member of a pit crew is to become an engineer! Look into studying an engineering degree at a university such as an Engineering Foundation degree, or a Higher National Diploma. Also, keep an eye out for any work placements or apprenticeships at teams that become available.

How does an F1 pit crew train?

Members of the pit crew need to be physically very fit. The tyres weigh between 9.5 and 11.5kg and need to be moved at speed. Hours in the gym ensure they’re at peak fitness, as well as flexible and agile. It also requires strong mental strength, as so much rides on a good pit stop. If just one member of the team is not at the top of their game, this can affect the entire race.

Before a team heads to a race, they will practice pit stops at their factory. They will roll the car into a practice box, and repeat a stop over and over. This engages muscle memory, so the stop is perfect time and time again.

On a race weekend, teams will then practice the stop in the pit lane. This will be to get used to things like the angle a car might come into the pit box. At each practice session, the teams will perform a live pit stop. This involves the driver coming into the box at speed, rather than being rolled, and prepares the team for race conditions.

Where is the best place to watch pit stops at an F1 race?

Pit stops are undoubtedly one of the most exciting aspects of a Formula 1 race. They’re loud, critical, and lightning-quick. Most tracks have a grandstand that is opposite the pit building. This allows fans to look into the pit lane when these stops are being performed and adds an element to your race-watching experience you won’t get anywhere else on the track.

These grandstands are also in a prime position to see the starting grid, so you can soak up the atmosphere before the race before witnessing the deafening start of the race. Most – but not all – podiums are usually found here too, so these fans are in a prime position for the post-race celebrations.