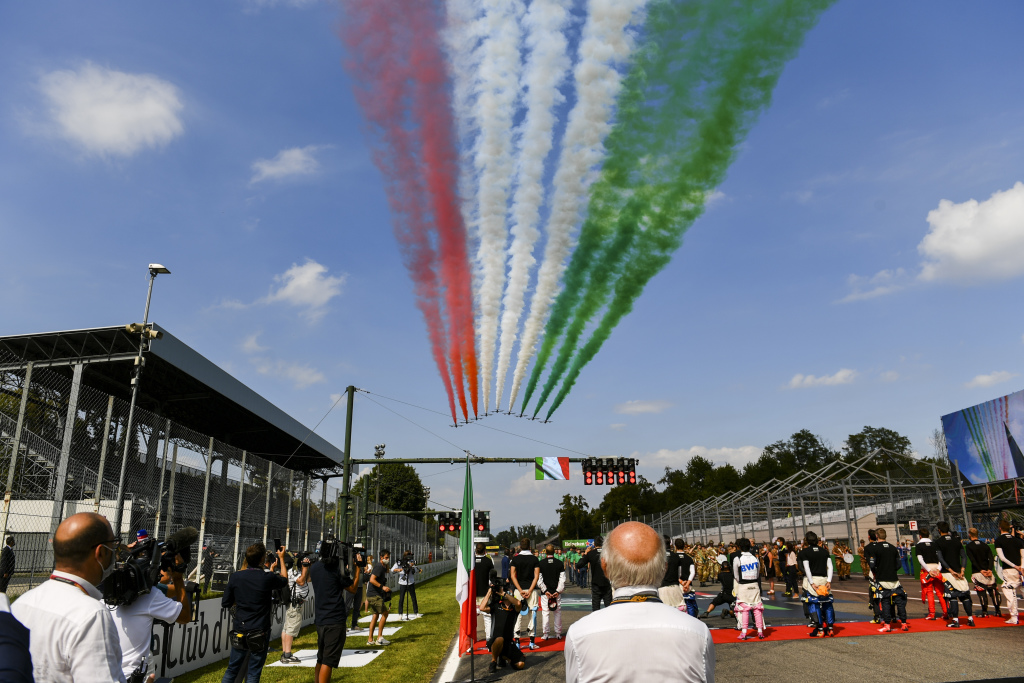 The circuit maps, session times, support series, weather forecast and the latest news from the weekend, check out this guide with all the information you’ll need.

To access the circuit before the race, you will need a ‘Green Pass’ certification. This is the Italian version of the EU Digital Covid Certificate – if you are travelling from the UK, your NHS Covid Pass will be accepted. Green Passes prove that a person has been double-vaccinated over two weeks ago, had a negative PCR test within the last 48 hours, or have recovered from COVID-19 in the last 180 days. This is necessary for all spectators aged 12 or over. If you cannot provide proof of immunity from COVID-19 at the circuit, you will not be granted entry and will not qualify for any refund.

It is also mandatory to register your ticket once you receive it. Click this link where you will be asked for a Card and Progressive number. You can then register the ticket to your name and ‘check-in’ to the event.

Wearing a mask is also necessary at the circuit, so ensure you take one to the circuit.

Travelling to Italy from the UK

There are a few things you will have to do before you travel to Italy from the race. However, Britons will no longer be required to quarantine for 5 days when they arrive in the country.

You will have to complete the Passenger Locator Form, and take a COVID-19 PCR test in the two days before you travel to Italy.

Following the success of sprint qualifying at the British Grand Prix, it returns for a second trial run in Italy. So, the schedule is significantly different. Practice will start later on Friday, and the qualifying session will take place in the evening. Free practice 2 will take place at lunchtime on Saturday, with a short race on Sunday determining the starting order for the Grand Prix.

While the Belgian Grand Prix was a washout, we’re not expecting the same case in Monza. However, according to Accuweather, there is still a chance of rain throughout the weekend – especially Saturday and Sunday.

There are three support series in action throughout race weekend at Monza. FIA Formula 2 restarts with its first race since Silverstone, while Porsche Supercup and Sports Prototype Cup will also race.

It’s been a while since F2 was in action – the last race was in Silverstone in mid-July. Despite Zhou winning the feature race, Australian Oscar Piastri took the lead of the championship with a decent haul of points. The Aussie is seriously impressing in his first season, while it might be Zhou’s best shot at the title since 2019. But the real winners will be Alpine, as both drivers belong to the French outfit’s academy.

This season’s Porsche Supercup concludes the 2021 season with a double-header at historic Monza. Much of the title race depends on what happens in Zandvoort the week before, but these two races could be pivotal. Dutchman Larry ten Voorde leads the championship from Kiwi Jaxon Evans in what is a two-way battle. There are 20 points between the drivers – that’s 5 less than a race win – so it’s all to play for in Italy.

A series of races in the UK-based Sports Prototype Cup will take place across the weekend. The cars look like a hybrid between an LMP and a Formula 1 car, and can produce 530 bhp per tonne.

Monza has hosted a Formula 1 Grand Prix in every season of racing since its inception 1950 – except once in 1980.

It’s a unique circuit on the calendar renowned for its exceptionally long straight leading to enormous high speeds. The teams will adopt low downforce setups to maximise speeds along the 1.15km pit straight and 980m back straight.

But the rest of the lap is frightfully fast, too. The slowest point on the circuit comes at the turn 1 chicane, before the drivers pick up the speed towards the second chicane, which they can carry slightly more speed through. A series of quick left-handers, known as the Lesmos, test the cars’ downforce before a perfect exit is required from the third and final Chicane – Ascari.

Ascari sets the driver up for the back straight before they reach Parabolica – a formidable 180-degree left-hand turn onto the main straight.

This year, WEC races at Monza for the ver first time. For a taste of the circuit, check out the action from the race thanks to Motorsport.tv.

What happened at the last Italian Grand Prix?

The 2020 Italian Grand Prix was one for the ages. An unforgettable race that was plunged into chaos, but emerged full of beautiful moments.

Kevin Magnussen’s Haas broke down just after Parabolica on lap 19 of the race. When the safety car was deployed, Lewis Hamilton and Antonio Giovinazzi duly pitted for new rubber. However, no other car came into the pits. Confusion reigned until it was revealed the pit lane had been closed to ensure stewards could push the stricken Haas into the pits.

Once the safety car pulled in, Charles Leclerc suffered a huge hit on the way out of Parabolica. The race was red-flagged to repair the tyre barrier, and the stewards got to work. While the teams were waiting for the restart, Gamilton and Giovinazzi were handed hefty 10-second stop-go penalties. These had to be taken within 3 laps of the restart, and would put them at least 30 seconds down on the rest of the field.

Pierre Gasly would go into the lead of the race, and had a pretty easy final half of the Grand Prix. He was hunted down by Carlos Sainz, who carved his way through the field and finished within a second of the Frenchman. Lance Stroll’s gamble not to pit during the initial safety car period paid off, as he picked up places and crossed the line third.

It would be the most extraordinary podium in recent memory. The only race in the turbo-hybrid era not to feature a Mercedes, Red Bull or Ferrari, and one of the youngest podiums in F1 history.

How to stay up to date at the Italian Grand Prix

Or get a round-up of the latest headlines from Budapest and beyond with Motorsport.tv LIVE‘s latest bulletins. Head to their channel on Motorsport.tv for the latest news, interviews and reaction from the paddock. Check out the latest show The Week with Will Buxton, a special episode direct from Le Mans.