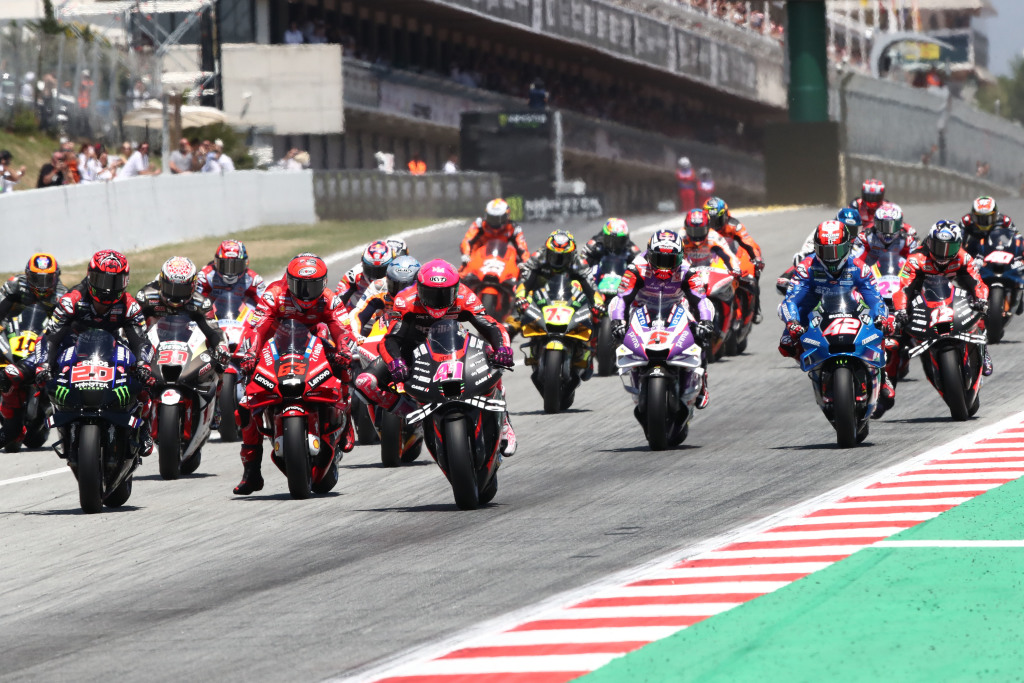 MotoGP: five dramatic moments from the 2022 season so far

Will Longman 28 June 2022
At the mid-way point of the MotoGP season in 2022, we look back at five season-defining moments from before the summer break.

We’re only halfway through the 2022 MotoGP season, but already, we’ve witnessed thrills and spills aplenty.

We’ve seen titanic title battles, extraordinary maiden winners, and an incredibly emotional season – and yet we’re only at the summer break.

As we break down for the summer, we look back at some of the major moments from the season so far.

The new series got underway under the lights in Doha in style.

The fight for the podium places was a constant battle between the two Hondas, KTM’s Brad Binder, and the Gresini rider Enea Bastianini. A race-long tussle saw Bastianini – the 2020 Moto2 champion – rise through the places until he was on the tail of leader Pol Espargaró.

With four laps to go, the young Italian blasted past Espargaró and saw the Honda overshoot the first turn. That opened the door for a debut victory for Enea, and an emotional first victory in 16 years for the Gresini team, who lost their eponymous founder to COVID last year.

The past three years have been among the toughest of his racing life. The 2020s have really not been kind to the eight-time world champion. His recovery from surgery in 2020 looked to be on track as he won two races in 2021, and sat out the final two rounds to focus on rehabilitation for the forthcoming campaign.

But disaster struck during the warm-up lap in Indonesia, as he suffered a huge high-side at Mandalika. He’d already crashed three times in practice, and was rushed to hospital. He returned to the track, but another surgery on his right arm was required, so he had to sit on the sidelines once again.

At last, a MotoGP win for Aleix!

With 13 years of experience in the premier class, Aleix Espargaró has been out to prove that 2022 will be different. Fast, competitive, and driven, his task was to make a splash with the returning Aprilia factory team.

And it only took three races to get up to speed, when he took his maiden victory after 200 Grand Prix starts. He engaged in a tough fight with Jorge Martin through the winding  Autódromo Termas de Río Hondo, but wasn’t able to get his bike slowed down in time to make the perfect move. But with five laps to go, the Spaniard got it right and was unleashed into the lead.

Having soaked up four laps of intense pressure, Espargaró took to the top step for the first time in his motorcycle career.

It wasn’t to be the last time Espargaró would be in the spotlight. He has consolidated his debut victory with four successive podiums. But the first half of his season will be defined by a complete moment of madness in Catalunya.

Sat in second place behind championship leader Fabio Quartararo, Aleix looked set for a decent podium, keeping the pressure on the Frenchman. But as the Aprilia crossed the line to start the final lap, the bike slowed, driver relaxed and started waving to the fans. It wasn’t until the third bike had passed him that he realised the race had not, in fact, finished.

He dropped to 5th position, throwing away nine precious points to the reigning champion. Upon his return to the garage, the inconsolable rider realised his vital mistake – misreading the lap count on the timing tower at Circuit de Barcelona-Catalunya…

Quartararo over the handlebars

Reigning world champion Quartararo has enjoyed a faultless season. Three wins, six podiums, and top of the drivers’ standings. But he took a major blow at Assen, just before the season’s break.

The Frenchman took a rash decision to dive down the inside of Aleix for second place in the early stages of the race. He lost the bike, and crashed into his title rival.

While Aleix dropped to 15th and undertook a heroic effort to rise to an excellent fourth place (with a stunning double overtake in the final chicane), Fabio faced different fortunes. He consulted his crew about retiring, but continued, with the risk of rain looming over the Assen circuit. But it was just three laps before the damage sustained to his bike proved it unrideable. He was thrown over the handlebars, opening the door to his championship chasers, and the prospect of an epic second half of the season.

Remember, the drama isn’t over yet: we still head to Austria, Aragon, Australia and Valencia before the year is out. To book your seat at a race this season, check out our available MotoGP tickets.