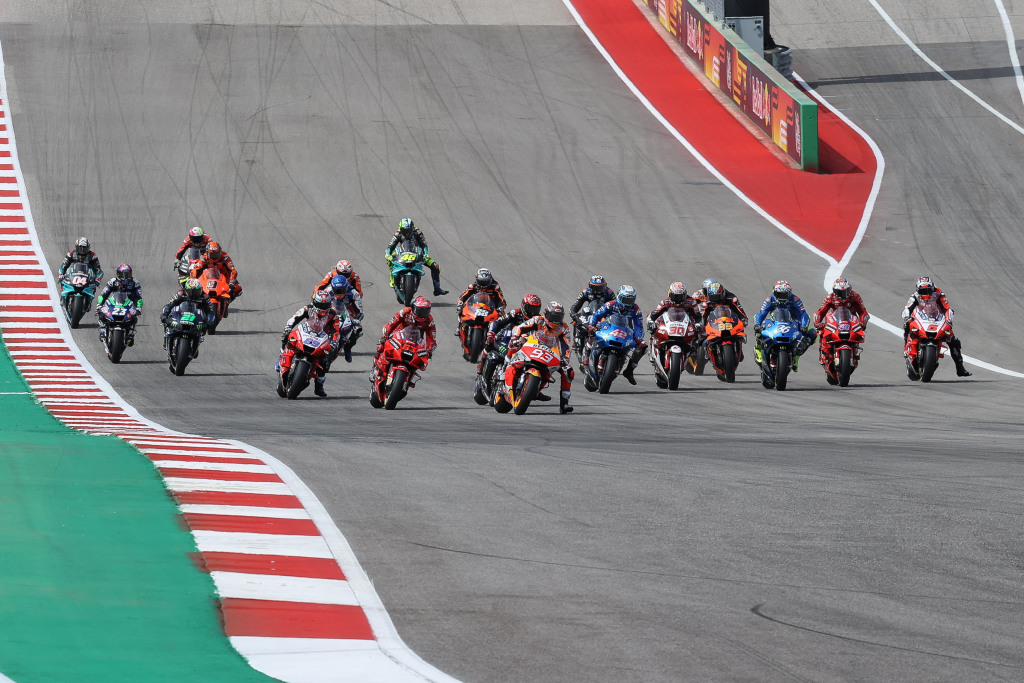 3 Dec 2021 Will Longman
Find out which MotoGP riders and constructors have the most wins, pole positions and championships, including Valentino Rossi and Marc Marquez

MotoGP is the most competitive motorcycle racing series in the world, with an illustrious history of competitive on-track action. Over its seven decades as a sport, it has given a platform to the bravest and fastest riders in the world.

Some have gone on to be legends, dominating the record books, be they the riders themselves, or the teams constructing the ferocious machines.

With one of those legends, Valentino Rossi, retiring from the sport in 2021, we take stock and review some of the current record holders in MotoGP history. From riders and constructors records for most wins, podiums, championships and more, take a trip down memory lane, and learn about some legends.

Note: all the records here refer to MotoGP/500cc class races and championships.

Most MotoGP race wins by a rider

There’s a reason he’s hailed as a legend of the sport. With 89 500cc Grand Prix victories under his belt, spanning from 2000 to 2017, Rossi has more top-class wins than any other rider. His winning margins span from a huge 22 seconds at the 2002 Portuguese Grand Prix to just 0.013s at the 2001 Australian Grand Prix. He took most of his wins at the Circuit de Barcelona-Catalunya and TT Circuit Assen (10), and his last victory was at the latter when he won in June 2017.

The great Giacomo Agostini is second with 68 wins. However, his feat is all the more impressive given how fewer races were contested during the 1960 s and 1970s. His 68 wins came from just 120 races, giving him a win rate of 57%. This eclipses Rossi’s mammoth 89 wins from 372 races (24%). Agostini also achieved the feat of three consecutive seasons with 100% win rates in both the 500cc and 350cc classes.

Most pole positions by a rider

Around one lap, no one does it better than the Ant of Cervera, Marc Marquez. The Spaniard has taken pole position in 62 of his 142 races in 500cc racing. This has set him up for an outstanding podium rate of 70%, and led to him winning six titles in his nine seasons of racing.

Australian Mick Doohan is a close second. His 58 pole positions in 137 races set him up for a brilliant 95 podiums on his way to five world titles. That’s a trip to the rostrum in 69% of all his races, and pole position 39% of the time.

Two Italians top the table for most titles. Giacomo Agostini’s eight world titles put him at the top of the class, one ahead of Valentino Rossi. Seven of Agostini’s titles were consecutive, from 1966 to 1972, and he also won the 350cc championships from 1968 to 1974. He won every 500cc race he finished from 1968 to 1972, with just a handful of retirements. While he rode away from the field during his consecutive championship years, his final title was hotly contested with British rider Phil Read. Agostini finished just 8 points ahead, which was the equivalent of a 4th place finish.

The list below shows the generational dominance riders tend to have in MotoGP. Rossi’s seven titles came in just nine years; Marquez’s six titles came in seven years; Doohan’s five titles were all in a row. Each rider in the 5th spot has 4 titles each, and every rider accomplished these victories in five years. In fact, the riders on this list account for 52% of all World Championships ever won.

Oh so close, Valentino Rossi was just one podium away from a very special milestone when he retired in 2021. With 199 race trophies in his cabinet, Rossi has finished in the top three in 53% of his MotoGP races. Closest contender Jorge Lorenzo has been to the podium on 114 times (56%) on his way to 3 championships, and fewer races than Rossi.

Dani Pedrosa is the only other driver to have broken the 100 podium feat, and has also been up to the steps on more than half his races (51%). Marc Marquez could be the next rider to break the three-figure barrier, and has a far superior ratio than the riders above him (70%).

Most race wins by a constructor

It wasn’t going to be anyone else, was it? The Japanese outfit has won over 300 races in the history of MotoGP. And it’s little wonder when they’ve five of the top eight World Champions race for them over the years. Honda has been a dominant force throughout the history of the sport, with fellow Japanese team Yamaha the second-closest constructor with 242 victories.

Most MotoGP world championships by a constructor

As you might expect with so many wins and championship-winning drivers, Honda also has the most constructors’ championships with eight. MV Agusta is second in the list with 16 – the Italian team raced between 1950 and 1976, with up to 6 riders racing for them through some seasons. Yamaha has taken 14 championships, which are scattered around sporadic periods of success since its first in 1974.

Sources include MotoGP.com and Motorsport Stats.