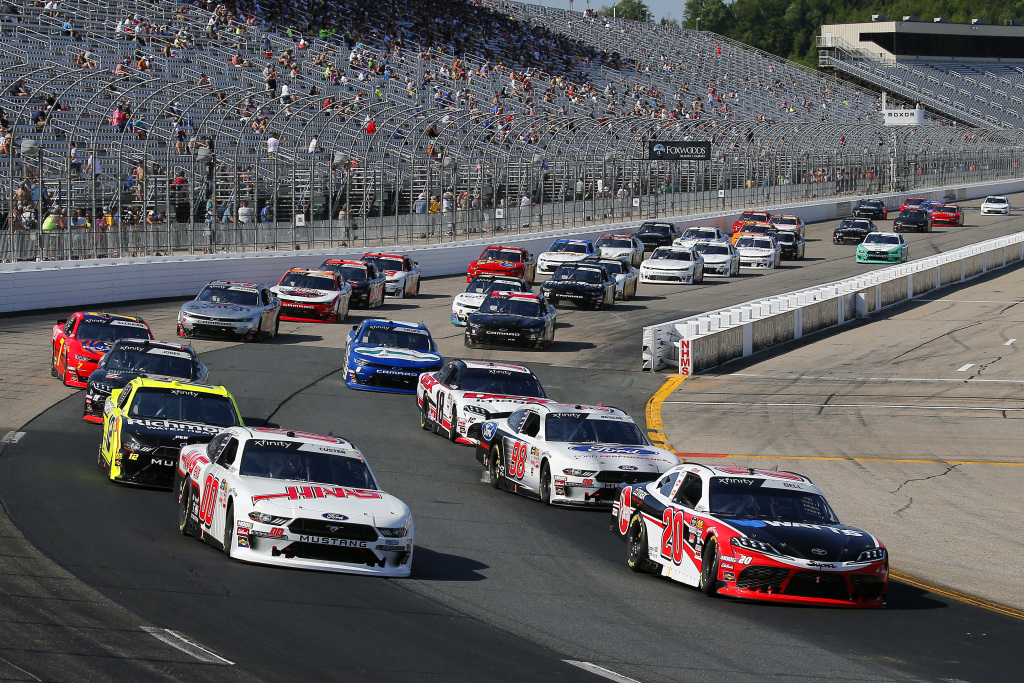 NASCAR for Beginners: Get up to speed on the epic racing series

Will Longman 11 June 2021
Get the basics of NASCAR including famous drivers, car information, circuit information, and book NASCAR tickets for the season

If you’re a fan of Formula 1 or MotoGP, you might find NASCAR a little underwhelming. On the face of it, it might appear like it’s simply cars driving left in a circle for hours. But if you fully embrace the sport for what it is, it’s so much more than that.

NASCAR, or National Association for Stock Car Auto Racing, has always been about driving cars that are available to the public – a stock car. In theory, you could buy a car and soup it up to NASCAR standards, and that’s exciting in itself.

And with bigger fields, variation in different types of track, and the real challenge that comes with speedway racing, it can be a wild ride. There’s a reason it’s one of the most-watched sports Stateside.

But if you’re entering the world of NASCAR and don’t know where to start, we’ve got you covered. Here are the basics, including the cars they drive, how the races work, the drivers to look out for, and more.

What cars do they drive?

In all three series, the cars run 5.86L V8 engines with 4-speed manual transmission. The cars can’t exceed 3,200 lbs in weight, and in the Cup Series, the cars have 750 horsepower. This drops to 700 in the Xfinity and Truck Series.

This makes for epic racing, with Cup Series cars hitting speeds over 320 km/h during races.

The essence of NASCAR is that they are stock cars. One rule used to require manufacturers to sell the machines they race on weekends. So you could watch an epic race, then head down to your local dealer and splash out on the very same machine that you saw win on TV. In the modern-day, the cars are similar to those production machines, but the rules allow for modifications that allow the cars more speed, and to be safer at those speeds.

How fast are the NASCAR cars?

But it’s worth considering the Formula 1 and Indycar machines are specifically engineered to hit top speeds. But in NASCAR, the cars are modified from existing chassis to hit the fastest speeds possible.

Which circuits does NASCAR race on?

There are four different types of circuits that NASCAR races on across the 36 races of the season. These are speedways, superspeedways, short circuits and road courses. But, what are the differences? And how do you differentiate between a Speedway and a Superspeedway?

Speedways are 1 – 2 mile tracks, that could be considered ‘traditional’. Normally D-shaped, or paperclip-shaped Martinsville Speedway. A Superspeedway, like Daytona or Talladega, is longer, wider and quicker than their less-super counterparts. They produce higher speeds, and usually wildly exciting races.

The short tracks are ovals less than one mile in length. As the name would suggest, they are shorter in length, but also thinner, meaning less room to run side-by-side.

Road courses are the final type of circuit in NASCAR. They are more ‘traditional’ tracks, and in 2021, we saw the series race at the Circuit of the Americas. Road courses are the only types of track NASCAR can race in the wet, as they did at COTA. Check out the highlights of the crazy race.

Well, they’re certainly different to what you might be used to in Formula 1 or MotoGP. In 2017, stage racing was introduced.

When the race gets underway, a specified number of laps from start to finish. Hint: the number at the end of the race title is the number of miles in the race. So, the Daytona 500 is 500 miles of Daytona International Speedway – that’s 200 laps.

However, it isn’t straight racing from start to finish. The race is split into three different stages, designed to make the racing more exciting. After approximately a quarter of the race is run, a green and white flag is waved, and a caution flag is thrown. This is the end of stage one, and points are awarded for the drivers in the top ten positions. The pace car slows the field down, the cars are allowed to change tyres before the race is restarted for stage two. Then the procedure is repeated: we race for a set number of laps before a caution is thrown and points are awarded to the top ten racers.

The third stage is an all-out slog to the end of the race. Points are awarded to every spot, and considerably more points are on offer for finishing the final lap in 1st place than any of the other stages.

The idea behind stage racing is that in theory, there are more first and final laps, increasing the excitement for fans.

When the racing is underway, a large element of NASCAR strategy is drafting. If you’re able to follow a car, it is punching a hole in the air meaning you can save fuel compared to the leaders. You’ll often see the cars following each other around in two lanes: the inside and the outside.

Tyre management is also key to the race, with pit stops key to a winning strategy. However, if a driver pushes their tyres over the limit, crashes are common. And these are particularly spectacular given how close the drivers follow each other during a race. That means yellow flag periods – where the cars slow down – are key for drivers to utilise and ensure their pitstops are more economical.

How do the playoffs work?

Yep, NASCAR has playoffs. Weird, right? The idea is that the winner of the championship cannot be decided until the final lap of the final race. More jeopardy and excitement in store for the viewer.

Ten races remain in the playoffs, and the scores are reset. If you win a race, you are through to the next round, and the other drivers compete for the points on offer.

There are three races in the ‘Round of 16’, and after these three races, the bottom four are eliminated. This is repeated until there are just four drivers, and a single race left. Whoever finishes highest up the order in that race is the Cup Series champion.

Who are the drivers I should know about?

There are several big names you should look out for in NASCAR. The likes of Kyle Busch, Kyle Larson, Chase Elliott and Ryan Newman are all household names in the US.

Chase Elliott is the reigning 2020 Cup Series Champion. He held off Brad Keselowski and Joey Logano to the championship. Elliott worked his way up the ranks from the Xfinity series, which he won in 2014, to the Cup Series. He’s raced over 200 races since 2015, taking 12 wins and 106 top-ten finishes.

Kevin Harvick shares the win record with Busch and has an incredible 400 top ten finishes across 734 races.

As you can tell, there is great longevity to the career of a NASCAR driver, and their careers often span multiple decades. They can also float between series, taking part in World Truck or Xfinity Series races alongside the Cup Series.

Motorsport Tickets is currently on sale with NASCAR ticket and hotel packages. Experience the racing live and book now.