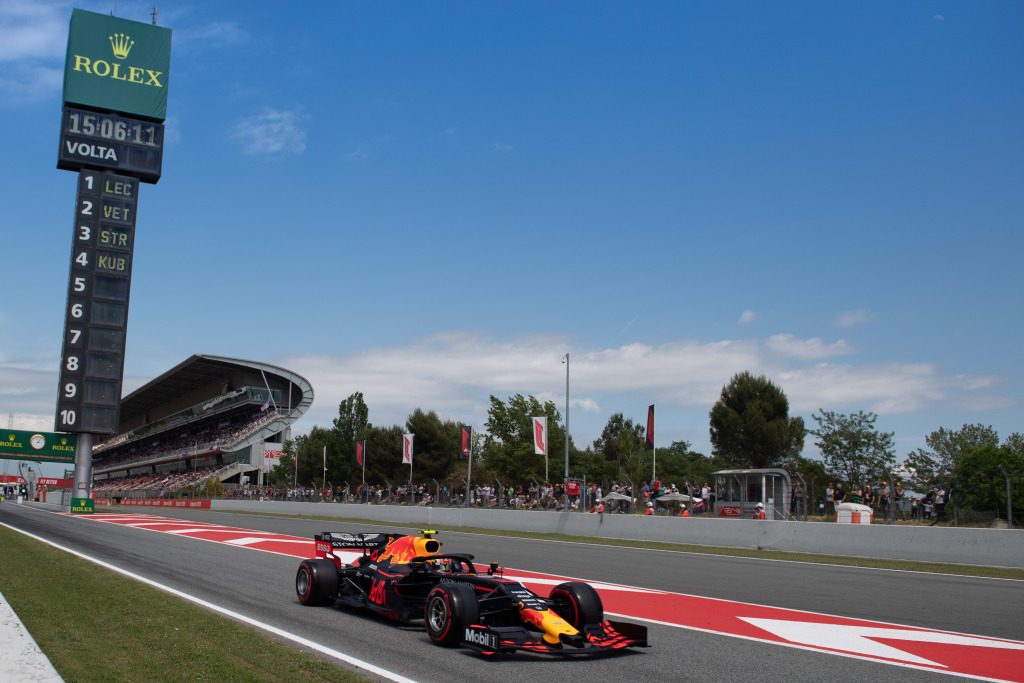 Will Longman 12 February 2021
Complete guide to every grandstand at Circuit de Catalunya-Barcelona, which hosts the F1 Spanish Grand Prix and Catalunya MotoGP races.

The Spanish Grand Prix is one of the most anticipated races in the European season. Usually the host of Formula 1 pre-season testing, the Circuit de Barcelona-Catalunya is a varied circuit with a wide variety of long-straight, high and low-speed corners, and plenty of racing action.

This makes it the perfect circuit to put the cars through their paces, which is what makes the Spanish Grand Prix a favourite for the fans.

And it’s not just the action on the track, either. The circuit is just half-an-hour from Barcelona’s beaches. Plus, taking place in May, it’s a perfect chance to bask in the glorious Spanish summer sunshine.

But where are the best places to watch the Spanish Grand Prix? In this handy guide, we take you through the best grandstands to see all the action during the weekend.

As at any circuit, the main grandstand opposite the pits is one of the best vantage points to watch the race. You get to soak up the atmosphere on the grid pre-race, feel the thrill of 20 Formula 1 cars revving their engines for the start, and keep an eye on what’s going on in the pit lane.

The large grandstand is split into two levels. The high seats give you a great view of the all-important stops. TV screens on either side of the pits keep you abreast of all the action elsewhere on the circuit, but in the main stand, you get a view of one of the race’s iconic features: the tall timing column at the end of the pits. If anyone changes position, you’ll see it first here, and it makes for some brilliant photos during the weekend.

The lower tier gets you as close to an F1 starting grid as possible, where you’ll feel the power of the cars as they take off from the line. Both grandstands are covered, getting you out of the sun during a warm day’s racing.

When the cars have made it to the end of the long pit straight, they’re faced with a relatively high number of high-speed ess sections. A braking zone into a right-hand turn, before sweeping to the left and back to the right.

Grandstand A is in the unique position of being placed right in the middle of this sweeping section. As a complex that often sees a big squeeze on the first lap, you’re likely to see action here at the start of the race. But as the laps count on, the DRS zone on the straight and braking zone into turn 1 make this a prime overtaking zone, too.

Grandstand J is just along from the main grandstand on the pit straight, right opposite the pit exit. With a view of turn 1, this is the place for the budding strategists to sit, as you’ll see whether the overcut/undercut pit stop strategy gets pulled off.

As for the start of the race, you seat will be just along from the grid, so the cars will be well on their way to 200km/h from a standing start. You’ll see those initial first lap tussles playing out, too, as the race gets underway.

Unlike the main stand, grandstand J is uncovered, so you’ll need to pack accordingly for the summer Spanish heat.

Grandstands B, C, G and H

Away from the pit straight, a majority of the grandstands are found in sector three of the circuit. Following the high-speed sector two, the final part of the lap at the Spanish Grand Prix is a slower, more technical drive.

These four grandstands look down on the final sector, creating a stadium bowl-like atmosphere as the cars parade through to the end of the lap. Grandstands C and H will also catch the final chicane, which has been known to catch a few drivers out, and is a great last-gasp overtaking opportunity.

The lone grandstand in the second sector doesn’t make the atmosphere in Grandstand N any less. The cars climb a hill towards a sharp turn onto the second-longest straight on the track; fans catch all the action as the cars make that transition.

This can be a prime place for cars to get ahead on the run down to the final sector. It’s also flanked by general admission areas, so is usually a great atmosphere throughout the Grand Prix.

These three grandstands are also on the pit straight, a little further along from Grandstand J. As they are at the end of the circuit’s longest straight, this is where you’ll see the F1 cars hit top speed for the Spanish Grand Prix.

Grandstands E and F are closer to the braking zone for turn 1. If there’s first lap drama, this is the prime position to see it. But as the race goes on, this will be where cars benefit from the DRS before making an overtake.

Grandstand L is a great spot for fans who want the most action for their money. You get a great aerial view of the cars sweeping through turns 1 to 3. The field loops around the back of the stand, and the cars and appear again as they exit turn 4.

Grandstand M is right next to L, and so has a similar view of turns 5, 6 and 7. However, it’s slightly behind grandstand L. While you’ll be able to see turn 1 from a distance, the rest of the opening complex is somewhat obscured.