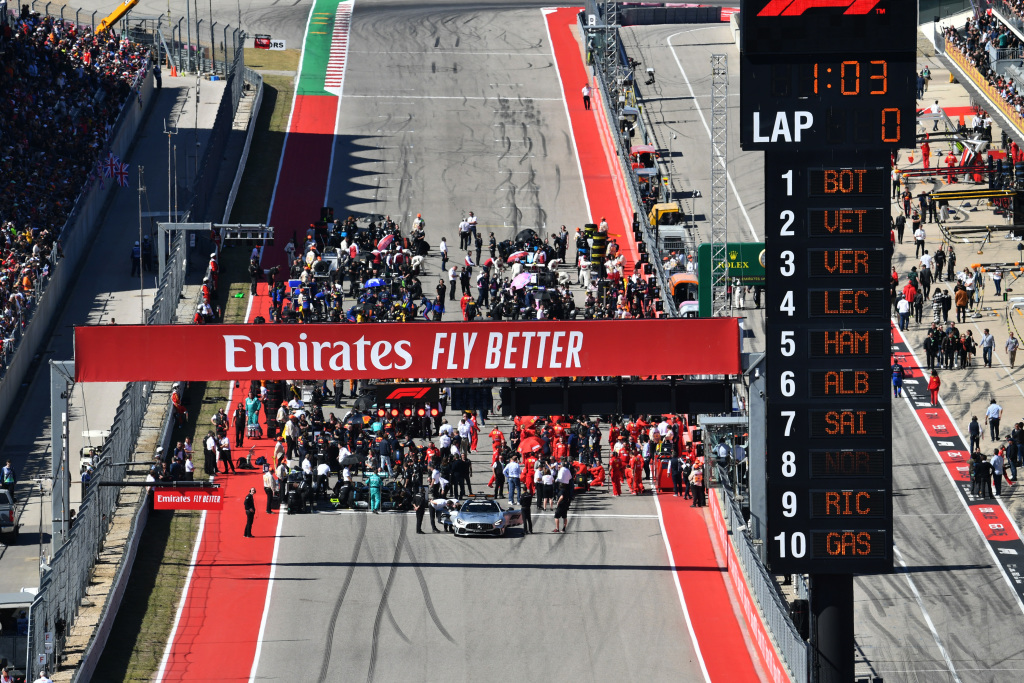 Don’t worry America, we didn’t forget about you. The United States Grand Prix is back as Formula 1 returns to go racing at Circuit of the Americas once again.

With the title protagonists, Max Verstappen and Lewis Hamilton separated by just six points, the teams will be pushing hard for as many points as possible with races in 2021 running thin.

There’s more action to enjoy besides the F1 action, with the W Series reaching an exhilarating conclusion in its second season. Jamie Chadwick and Alice Powell are level on points, with a double-header at COTA to decide the winner.

And if that was enough, Billy Joel and twentyone pilots will be performing over the weekend too.

All guests at indoor ticketed facilities operated by the Circuit must provide printed proof of a negative COVID-19 rapid test, taken before 20th October. This only applies to Tower Club, Club SI, Circuit Suite & Chairman’s Suite.

All fans attending COTA are advised to wear face makes, but this is not a requirement. If you have tested positive, are awaiting results of a test after contact with a positive case, have been informed that you have been in the immediate vicinity of a person now known to have been carrying the Coronavirus or are experiencing symptoms, you will not be admitted to the circuit.

Circuit of the Americas Map

For a hi-res version of this map, plus maps for parking and getting to the circuit, click here.

Austin is on Central Daylight Time, which is six hours behind British Summer Time. The race will begin at 2pm local time, and 8pm in Britain.

More than twenty bands will also be playing on stages across the circuit all weekend, setting an all-American soundtrack for the race.

Fans attending the race in Austin, be prepared. The weather is likely to hold out, with temperatures in the high twenties all weekend. However, the long forecast indicates there is a slim chance of thunderstorms on Sunday morning into the afternoon. Be sure to pack appropriately for the conditions.

There are two support races with championships on the line in Austin this weekend. The United States F4 Championship reaches its conclusion, while the W Series will crown its second-ever championship after one of the closest motorsport title fights ever. Each series will race twice, once on Saturday and once on Sunday, with practice and qualifying events to enjoy, too.

It’s a huge weekend for the all-female W Series. After six races supporting Formula 1, it will crown its second-ever champion after races on both Saturday and Sunday. Going into the weekend, Brits Alice Powell and reigning champion Jamie Chadwick are level on points. (Hamilton and Verstappen, eat your heart out…) So it’s truly all to race for, with the winner being crowned after the race on Sunday morning.

Some of North America’s finest youth driving talent will battle for glory at COTA during the race weekend. The single-seater Ligier JS F4 cars are equipped with 2L Honda engines producing 160bhp. There will be two races across the weekend, which will be the final two races in the championship. Mexican Noel León currently leads Canadian Mac Clark by five-and-a-half points, so expect fireworks on track in Austin.

Circuit of the Americas

Circuit of the Americas literally takes the best of racing circuits from across the globe. Architect Hermann Tilke had a completely blank canvas to work with when an area was scoped out in the Austin desert. So it was decided to bring elements from tracks in Europe together to create one epic track.

Some of the corners mimicked include Silverstone’s Maggotts and Becketts, Turkey’s Turn 8, Hockenheim’s Arena Bends, Interlagos’ Senna ‘S’, and turn 3 at the Red Bull Ring.

There will be two DRS zones, the first along the back straight at turn 11 to 12, and a second along the pit straight.

For a glimpse of what to expect from COTA, take a look at lap 1 from the NASCAR Xfinity race in 2021 – and be sure to catch the NASCAR demo display throughout the weekend.

What happened at the last United States Grand Prix?

It was a vital race in the career of Lewis Hamilton in 2019. The British Mercedes driver was a race away from the possibility of securing his sixth World Championship. He had work to do, starting fifth behind title contender and teammate Valtteri Bottas on pole.

The early drama came as the Ferraris struggled to switch their tyres on and lost ground to Lewis Hamilton before fighting each other. As Vettel squirmed around the track, he was passed by Lando Norris and Daniel Ricciardo before a bizarre incident saw the German’s rear suspension fail.

Hamilton picked his way through and opted for a one-stop strategy, with the rest of the field looking at two stops. That means the Finn would be forced to overtake Hamilton twice for the lead, which he did and on lap 52 he took the lead to go on to win.

But it didn’t matter as Lewis Hamilton would be crowned Formula 1 champion of 2019.