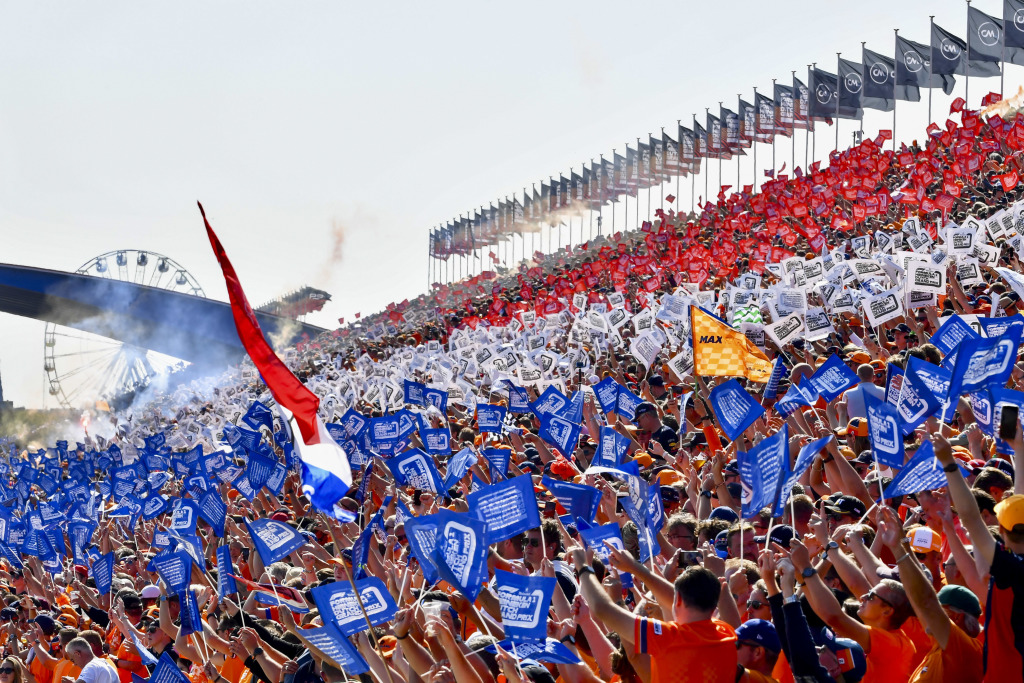 Will Longman 4 March 2022
See the most exciting, interesting and popular grandstands to watch a Formula 1 race from in 2022, plus how to book tickets for each race.

Over twenty-three races across twenty-two countries spanning five continents, Formula 1 aces are now bucket list events for any sports fans. Creating drama unlike any other sport on Earth, when the F1 circus rolls into town, thousands of fans descend on iconic venues to catch the action.

If you’re after for a starting point to your Formula 1 journey, look no further. We’ve compiled a list of ten of the best grandstands at F1 circuits around the world. From stands overlooking the most popular action areas, iconic corners or brilliant panoramic views, these options offer a small glimpse into what’s on offer.

Best grandstands to watch Formula 1 from in 2022

It was the site of the most definitive overtake in Formula 1 history. As Max Verstappen passed Lewis Hamilton on the final lap, fans in the North Grandstand knew they were witnessing history – no matter which side of that battle they sat.

The stand on the outside of turn 5 surrounds the newly-profiled turn. It was re-configured during the 2021 season to increase the car’s approaching speeds, create a harsher braking zone, and a wider radius turn. This all creates a stronger overtaking opportunity and provides plenty of action for fans in this grandstand to witness.

Grandstands 8a and 8b

The most popular grandstands at one of the world’s most iconic circuits, the two Grandstand 8 blocks overlook the Prima Variante. When the lights go out at Monza, the cars hurtle towards this opening chicane at huge speeds while barging for position. When they arrive at turn 1, it’s a real pinch-point as all 20 cars fight for position, and these stands get a great view of it all.

Of course in 2021, fans in these stands had a front-row view of Verstappen and Hamilton’s bizarre clash which saw the Dutchman end with his Red Bull on top of the Briton’s Mercedes. But as one of the fastest spots and biggest braking zones on the track (and F1 calendar as a whole), this is a spot where many drivers will attempt a move over the course of the race.

The Red Bull Ring in Austria is one of the shortest tracks all season at just 4.3km. But it’s the unique position in the Styrian mountains that make the Red Bull Ring so special.

From turn 1 up to turn 3, the elevation of the track rises around 60m as the cars pass the Red Bull Grandstand. This long series of stands stretches up beside the track, and fans here get a unique view of the cars driving up the hill, and then coming back down the hill through sectors two and three. In total, it’s possible to see six of the circuits ten turns from your seat. Plus, big screens opposite the grandstand keep fans informed on the action elsewhere.

Similarly to the Red Bull Grandstand, the Turn 12 Grandstand utilises Circuit of the America’s elevation to provide brilliant all-round views. The almighty climb to turn 1 at COTA puts the cars at 157m above sea level, before winding their way back down the circuit. Turn 12 – at the end of the back straight – is about a 25m elevation loss from turn 1.

The result is a stunning view of the cars taking on the tricky ‘S’ section through sector 1 from turn 3 to 10. The cars then take on the back straight and DRS zone towards the heavy braking at turn 12 – directly in front of the stand – and race through turns 13 and 14. Those with excellent eyesight and a handy pair of binoculars will even be able to catch the action at turn 1 in the distance.

Read our Circuit of the Americas grandstand guide.

Autódromo Hermanos Rodríguez first appeared on the Formula 1 calendar back in 1962, and dropped off in 1992. The following year, the Foro Sol stadium was built on the track. Doubling up as a concert venue and baseball stadium, the track was modified to run through the enormous stands, creating a spectacular slow sequence of corners.

But the atmosphere really reaches fever pitch both pre and post-race. The Mexican Grand Prix invariably takes place on the weekend of Día de Muertos (Day of the Dead). Race organisers ensure patriotic fans get their fiesta fix with an enormous parade on track before the race. After the chequered flag has fallen, the stadium is the scene of huge podium celebrations and parties into the night.

The Bay Grandstand in the heart of Singapore is the largest grandstand at any Formula 1 event. 27,000 people fill this grandstand, which overlooks a short section of the track, but has a view out into the incredible Marina Bay. The cars approach from behind the stand, pass in front, and exit underneath the seating area creating a special 360 cacophony of noise.

The Singapore street circuit is a large one, but this stand is conveniently positioned close to the concert area. Fans will get their hit of on-track action, without missing a second of the world-class entertainment after the race.

The legendary circuit on the streets of Monte Carlo is jam-packed with huge grandstands during Grand Prix weekend. But the grandest of them all is the stand besides the piercingly quick Tabac corner. From these seats, you will see the cars emerge from the famous tunnel, take on the Nouvelle Chicane, and power through the high-speed corner.

Grandstand K is tightly nestled behind the starting grid, so you will feel the roar of the start of the race, even if you won’t be able to see it. Fans are also treated to the quintessential Monaco backdrop of yacht parties in the harbour mere metres away from the track.

Gold 3 is one of three grandstands around the iconic Eau Rouge corner at Spa-Francorchamps. Being rebuilt in 2022 to fit the reprofiling of the turns, they offer a special view from the top of the most famous hill in Formula 1.

Eau Rouge has long been romanticised as the sport’s greatest corner. From the opening hairpin at La Source, the cars build speed before taking on this swerving uphill monster. Difficult enough for a single driver to navigate, the bravest of the brave will battle each other while traversing the turn. While it’s incredible to witness in person, budding photographers will snap jaw-dropping photos from this stand.

It’s long been known that Dutch Formula 1 fans are probably the craziest. Max Verstappen’s Dutch Army are used to following him around Europe and the world, taking with them smoke flares and thumping speakers. They were treated in 2021 with the return of the Dutch Grand Prix to Zandvoort, where Dutchies predictably stepped up the party.

The Arena Grandstands are built around a slow section at the end of the track. The cars enter from a DRS zone, so overtaking is a possibility. Drivers then parade around a slow chicane and a wide-radius corner at low speeds before powering towards the infamous banked final turn. Before and after the race (especially if a certain driver takes the win), the atmosphere in these grandstands are unlike anything Formula 1 has ever seen.

The park that plays host to the Canadian Grand Prix doesn’t have too many grandstands around its perimeter. There’s the main grandstand overlooking the grid, a few stands at turn 3, and the odd bank of seating at turns 8 and 9. But the grandstands around the pivotal hairpin in sector three is completely surrounded by seats.

The hairpin acts as a key overtaking zone just before the cars race towards the long straight and DRS zone. Grandstand 15 is on the outside of the corner’s apex, giving fans a great view of the cars approaching the area, turning through and accelerating away. However, grandstand 34 is also of note here. Located on the inside of the track, is offers an alternative perspective of the action.