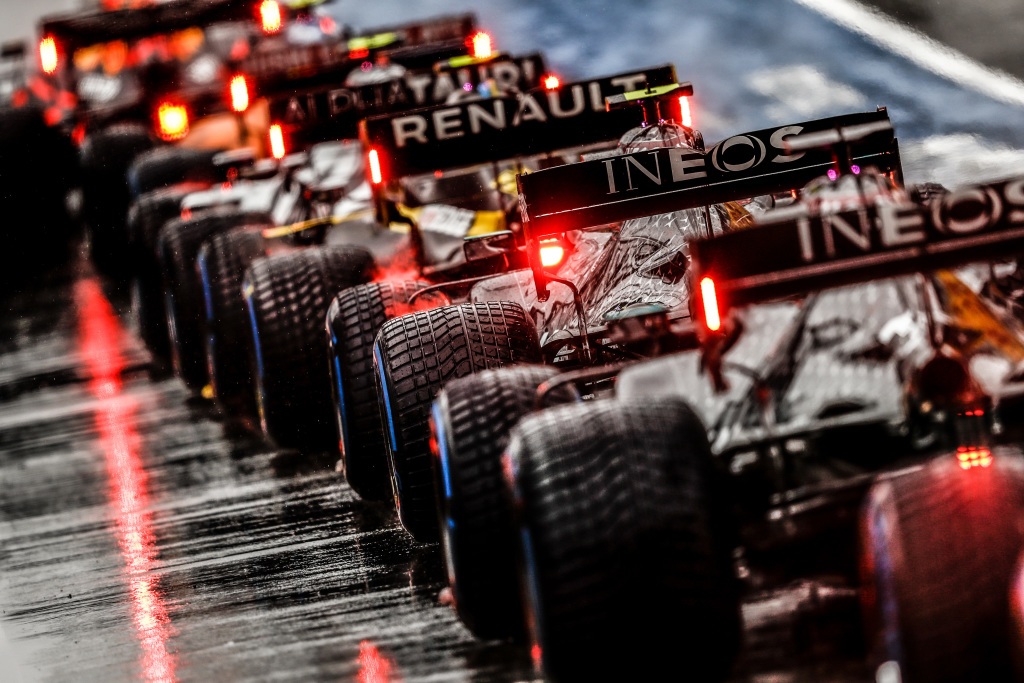 F1 in 2020 was chaotic, exciting, and one of the most enjoyable seasons in years. Read this review of Lewis Hamilton's record-breaking year.

2020 in F1 has been a year like no other. Delayed starts, driver swaps, new circuits, double-headers… it really has been unprecedented.

With COVID-19 impacting the sport, fans – for the most part – weren’t able to enjoy the races trackside. However, the sport did prove its resilience and in an unpredictable year, cemented itself as the most exciting sport on the planet.

While Lewis Hamilton characteristically dominated the championship, it was a special year for the Brit. Closing in on the records of Michael Schumacher firmly furthered his claim as one of the all-time greats.

But it wasn’t a one-man show, by any means. The uncertainty of 2020 opened the door for F1’s midfield to shine. With maiden winners, podiums and pole positions aplenty, this season provide a spark in the whole grid that anything can happen in Formula 1.

As we approach the final race of the season, here’s our review of everything that happened over the past 12 months.

The F1 season almost got underway in Australia, as planned, in March. However, just hours before practice was set to start, a member of the McLaren crew tested positive, leading the event to be called off.

The teams flew home, and waited patiently in lockdown. Like the rest of the world, F1 was on pause until it was safe for the season to restart.

The UK-based teams came together to launch Project Pitlane, in which each team pooled their resources in the battle against coronavirus. As pressure on hospitals across the world grew, while the factories were shut down, Formula 1 called on its spirit of innovation to assist with the production of ventilators.

But while the teams were working on assisting the frontline, F1 was busy adapting to the virus to get the season underway. The first phase of eight races included an opening double-header at the Red Bull Ring, and then another at Silverstone.

Back with a bang in Austria

And when F1 returned with the Austrian Grand Prix, it didn’t disappoint. Only 11 drivers crossed the finish line in a real race of attrition. But the turning point was an incident that saw Alex Albon taken out while overtaking Lewis Hamilton. A mirror image of their incident in Brazil a season previous, it opened the door for McLaren’s Lando Norris. Hamilton crossed the line second, but a stonking surge put Norris within the five-second penalty of the world champion. It gifted Norris his first podium, and making him the third-youngest driver to ever ascend the steps.

The following week, the drivers did it all over again, racing at the same circuit in back-to-back championship rounds for the first time ever. The excitement this weekend came from a wet qualifying session on Saturday. As George Russell put his car into Q2, the Williams team made it out of Q1 for the first time since 2018. A moment proving their intent of the season to come.

Hamilton won the Styrian Grand Prix, and the proceeding Hungarian Grand Prix, but the next race wasn’t so straight-forward. At a blistering hot Silverstone, Hamilton looked in prime position to comfortably win the race. But with few laps to go, his teammate Valtteri Bottas suffered a puncture, forcing him to pit. A few laps later, Carlos Sainz’s McLaren suffered the same fate.

Max Verstappen, sitting in second with a healthy gap to Leclerc behind, decided to pit for a safety stop, ensuring Red Bull brought home maximum points. Though this move may have cost them the win, as with half a lap of the Grand Prix remaining, Hamilton’s front left tyre failed. On fresh softs, Verstappen valiantly chased the gap from 34 seconds down to just 5s. But nothing could stop Lewis from incredibly crossing the line with three tyres.

The following weekend at Silverstone, however, saw Verstappen take his chances. When told to hold back, Max told his crew he wasn’t prepared to ‘sit behind Hamilton like a Grandma’. So he did what Max Verstappen does best, and sent it. He snatched victory, possibly Red Bull’s highlight of the 2020 season.

The weekend in Britain also saw the sport directly impacted by COVID-19 for the first time. Racing Point’s Sergio Perez tested positive for the virus hours before the first race, ruling him out for two weeks. This prompted a monumental effort from the team to draft in replacement Nico Hulkenberg. His return to F1 proved anticlimactic, as his car didn’t make the grid for the British Grand Prix. He made up for it one week later with a sensational 3rd in qualifying – proving to the teams just what they were missing out on in 2020.

Hamilton, again, dominated the next two races, winning in Spain and Belgium. But as F1 arrived at Monza for the Italian Grand Prix, all hell broke loose.

As expected, Lewis Hamilton lead the race comfortably before Kevin Magnussen’s stricken Haas brought out the safety car. Mercedes pounced on the opportunity of a free pitstop and changed Lewis’ tyres. But Antonio Giovinazzi was the only other driver to follow suit. However, as Magnussen’s car was to be pushed into the pits, the pit lane had been closed when they stopped. When Leclerc’s crash brought stopped the race, both drivers would drop to the back after they served 10-second penalties.

On the restart, Pierre Gasly pulled into second-place and defended from Carlos Sainz in the final half of the race to take victory by 0.4s. It was AlphaTauri’s first win since Torro Rosso won in Monza in 2008. Not since 2012 has a podium been without a Mercedes, Red Bull, or Ferrari driver. It was also the first time one of those teams didn’t win a race since 2013.

The following race was the first new addition to the calendar. The Tuscan Grand Prix saw F1’s first running at Mugello, foremost a MotoGP track. The race was notable for a huge pile-up on a safety car restart, which took four cars out. In the end, Mercedes scored a 1-2, and Alex Albon finally scored his first podium with Red Bull.

While Germany wasn’t a planned race for the 2020 calendar, it made a surprise return at the Nurburgring. Lewis Hamilton went into the race with a chance to equal Michael Schumacher’s record of 91 Grand Prix victories. And he did so in style, with Mercedes’ Dual-Axis Steering system helping the car to retain heat in the tyres during a chilly German Sunday. After the race, Michael’s son Mick presented Hamilton with a commemorative helmet in a profound moment for the sport.

Portimao in Portugal was drafted in to host its first F1 race, where Hamilton won overcame a chaotic start to victory and surpass the record. With 92 Grand Prix victories, Lewis Hamilton was secured a stake as the most successful F1 driver ever.

That race was followed by the return of Imola and Turkey, both of which Hamilton also won. In Istanbul, the combination of scattered showers and a slippery newly-laid surface proved challenging for all the drivers.

Lance Stroll scored his first-ever pole position which was the first by a team other than the “Big 3” since 2014. Hamilton overcame the conditions, to take victory by over 30 seconds and with it, a record-equalling seventh World Championship.

After the Turkish round, Formula 1 moved into the Middle East. The first of two races in Bahrain lead to a scene that reverberated around the world. On the first lap, Romain Grosjean collided with a barrier and his car instantly went up in flames. In one of the most ferocious incidents in decades, the Frenchman miraculously pulled himself out of the flames to safety. A testament to the advancement in the sport’s safety, he escaped with minor burns to his hands.

While Hamilton won the race on the restart – extending his consecutive win streak to five – his celebrations didn’t last long. The following day, Hamilton tested positive for COVID-19, ruling him out of the race around Bahrain’s shorter outer-circuit. This set up a showdown between Valtteri Bottas, and Williams’ George Russell, who deputised for the isolating World Champion.

Russell gets his big chance

It was seen as Russell’s audition for Bottas’ seat at Mercedes. And the Englishman aced it, qualifying 0.026s behind the Finn, and then taking the lead into the first corner. But both Russell and Bottas were hampered by more Mercedes pitstop debacles. Under a safety car, the Mercedes’ crew opted to double-stack both drivers. Russell pitted first, followed by Valtteri. However, confusion reigned as Valterri’s new medium tyres were replaced by his old set of hards.

Russell then pitted on the very next lap, as it transpired he was fitted Bottas’ set of tyres. This placed him down in sixth position, behind his teammate. George fought valiantly into second, and looked to be closing down race leader Sergio Perez for victory. But disaster struck once again, and a rear tyre puncture forced a fourth pitstop, and snatched his chance of victory.

It did, however, secure Sergio Perez’s first-ever win in Formula 1. In his penultimate race for Racing Point, and faced without a seat for the 2021 season, the Mexican finally stepped up to the top step. His teammate Lance Stroll took third marking Racing Point’s first-ever double podium, while Renault’s Esteban Ocon finished 2nd for his first F1 trophy.

Heading into the last race in Abu Dhabi, 13 of the 20 drivers on the grid have scored podium finishes. It was clear that while we had to go a long few months at the beginning of 2020, it had returned better than ever.

In 2021, with a fuller calendar planned with more races set to be competed, F1 teams agreed to race 2020’s cars. So we may well be able to expect even more of the same, before major regulation changes shake up the sport in 2021.

Will Longman 11 December 2020
SHARE THIS POST
Popular posts
Which Grand Prix Are You: Take the test to find your perfect event F1 2021 calendar: New races added as Vietnam Grand Prix postponed Kanato Le: Why I left Japan alone at 13 to race in the UK British F1 Grand Prix quiz: How well do you know Silverstone? Portugal F1 Grand Prix: 5 reasons to be at the race in Portimao MotoGP 2021: Provisional race calendar announced

Will Longman
11 December 2020
Popular posts
Formula 1
Which Grand Prix Are You: Take the test to find your perfect event
Finding the perfect motorsport event can be overwhelming. Take our Which Grand Prix Are You? personality test to find your perfect Grand Prix
Formula 1
F1 2021 calendar: New races added as Vietnam Grand Prix postponed
See the F1 2021 World Championship calendar in full, including dates and ticket information for all Grand Prix around the world
Insight
Kanato Le: Why I left Japan alone at 13 to race in the UK
Go-karter Kanato Le on why he decided to leave his homeland of Japan alone at the age of 13 to go racing in the UK and Europe.
Formula 1
British F1 Grand Prix quiz: How well do you know Silverstone?
Home of the British Formula 1 Grand Prix, test your knowledge of the legendary Silverstone circuit with this interactive quiz.
Formula 1
Portugal F1 Grand Prix: 5 reasons to be at the race in Portimao
For the first time, Portimao will host the Portuguese Formula 1 Grand Prix in 2020. Here's why you need to book tickets for this tantilising race.
MotoGP
MotoGP 2021: Provisional race calendar announced
See the full list of races MotoGP has planned for the 2021 season, and get the latest information on how to buy tickets to see the races live.
Consumer Protection
Accepted Payment Methods