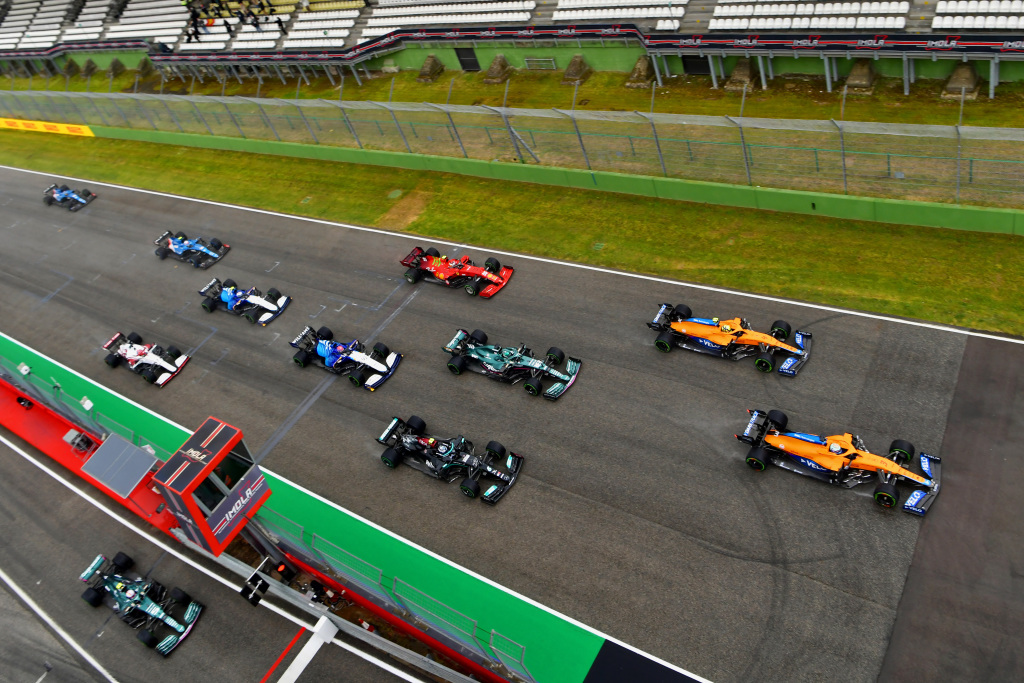 Will Longman 15 October 2021
F1 2022 Racing Calendar. See all Grand Prix dates for the upcoming 2022 season including information on how to buy tickets to Formula 1 races

Formula 1 has announced its provisional calendar for the upcoming 2022 season, with a record 23 races set to take place around the world.

As per the 2021 season, the action gets underway in Bahrain on 20 March before returning to Saudi Arabia the following week after its debut in November. Australia will remain on the calendar, but the traditional season-opener will take place on 10 April.

For the third year running, the Chinese Grand Prix will not run. Instead, F1 will be returning to Imola, which stepped in to hold races in the last two seasons, in April.

The sport then heads to its only new race of the season as it sets up for the first-ever Miami Grand Prix on 8th May. The first of two races in America, it will take place around the Miami Dolphins’ Hard Rock Stadium, with the United States Grand Prix at COTA going ahead in October.

Following its success in 2021, the Dutch Grand Prix will keep its spot in September as part of a triple-header with the Belgian and Italian races. Taking place on 4th September, the event garnered a reputation for its incredible atmosphere when Zandvoort returned in 2021, and tickets for the 2022 edition are expected to go on sale shortly.

Next season will also see the return of the Singapore Grand Prix. Following rumours it might be replaced by a Turkish Grand Prix, it has been confirmed that the Marina Bay Street Circuit will host a night race and return to the calendar for 2022 on 2nd October.

As the longest season in F1 history, and with the aim to conclude the action before the World Cup in Qatar, there will be three triple headers throughout the year: Britain, Austria and France in July; Belgium, the Netherlands and Italy in August/September; and Russia, Singapore and Japan in September/October.

Sprint qualifying to return to one-third of races

After it was trialled at the British and Italian Grands Prix in 2021, Formula 1 will bring its new Sprint Qualifying format to one-third of the calendar.

It means more competitive action for fans, with traditional qualifying moving to a Friday evening before a one-third distance race on Saturday determining the grid for Sunday’s Grand Prix.

This adds an extra incentive for fans to attend the full F1 race weekend, with a competitive session taking place on every day of these race weekends. To be alerted when sprint qualifying events are announced, be sure to subscribe to the Motorsport Tickets newsletter for updates.

Unveiling the new era of Formula 1 at testing

2022 heralds in a new era for Formula 1 racing. While the planned changes have been delayed owing to the Covid-19 pandemic, we will see the sweeping regulation changes in action this season.

The aerodynamics of the cars will be simplified, with the aim of reducing the dirty air thrown behind a leading car, making it easier for drivers behind to approach and overtake.

This overhaul should mean closer racing, more overtaking and better action throughout the season.

Fans first chance to see the cars hit the track will be at testing. In 2021, testing was moved from its traditional venue in Barcelona to Bahrain, weeks before the first race there.

The expected plan for 2022 is to hold testing at both venues, with an event from 23 to 25 February in Barcelona, and a longer session in Bahrain ahead of the curtain-raiser in March. This is yet to be confirmed.

Tickets are expected to be available for the session in Barcelona, follow Motorsport Tickets on social media to find out when you can book to be the first to witness the new cars in action.