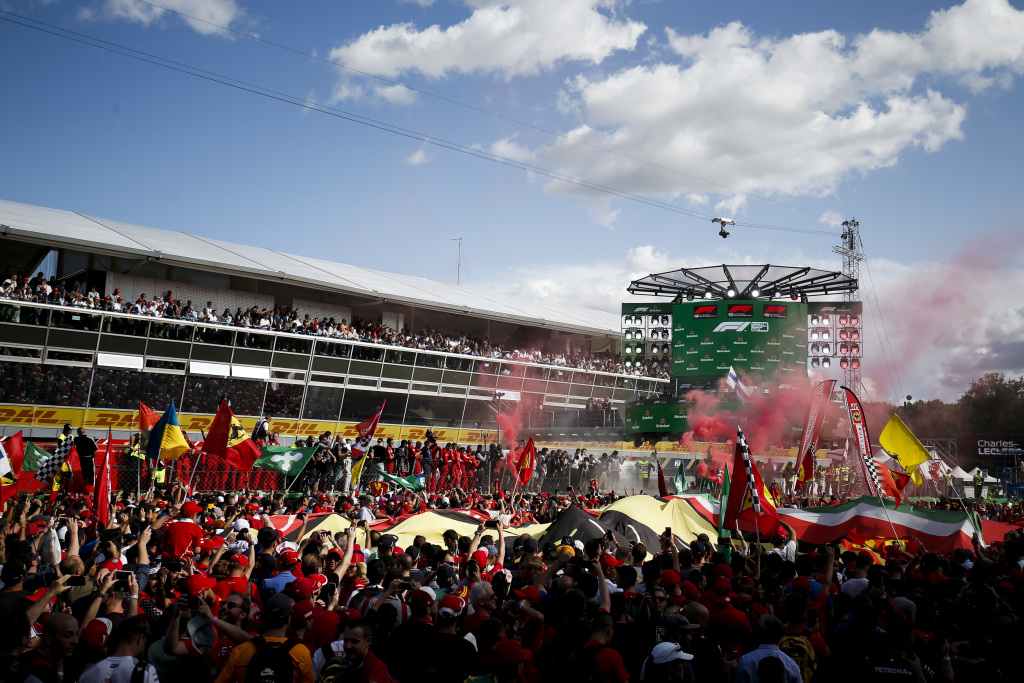 2 Mar 2021 Will Longman
A complete guide to all the grandstands at the Italian Grand Prix at Monza, including what you can see and information on general admission

The Italian Grand Prix is held every year at Monza, the ‘Temple of Speed’, just outside Milan. Speed really is the name of the game when it comes to the race here, and there are plenty of spots to choose from to see the cars at their fastest.

This circuit sees the drivers at full throttle for the majority of the lap, with three chicanes, the two Lesmo bends and the wide Curva Grande and Parabolica making the Italian Grand Prix an action-packed Formula 1 race.

In this grandstand guide, you’ll find out what you can see from the different stands at the track. We’ve also picked out some key moments from recent races that would have unfolded right before your eyes, as well as where you can access with a general admission ticket for the Italian Grand Prix.

Guide to the grandstands at Monza for the Italian Grand Prix

There’s nothing quite like the buzz of the pit straight on race day at Monza. While you are able to soak in the atmosphere pre-race as the cars prepare on the grid, you can also see right into the pit lane. How great that would have been in 2020 when Lewis Hamilton was slapped with a 10-second stop-go penalty for entering the pits when closed during the race?

However at Monza, it’s extra special. This is the fastest lap on the calendar, and after building up speed through the long back straight and around the Parabollica, they reach max huge speeds across the main straight before the major braking zone at the first chicane. These grandstands will provide excellent views of F1 cars pushed to their limit.

But post-race, these stands provide a sight to behold. Lined with Ferrari’s adoring Tifosi, the fans flood onto the pit straight to celebrate what they hope will be a victory for the Italian team. The scenes in 2019 when Charles Leclerc took the first Ferrari home win in a decade were iconic. History would have surely repeated itself in 2020 too, when Gasly took victory for the other Italian team, AlphaTauri.

If you’re looking for maximum atmosphere from your Grand Prix experience, book one of these five grandstands.

One of the major action zones at Monza comes at the Prima Variante, or ‘first chicane’. The cars squeeze up for this slow right-left chicane before picking up the pace again for the Curva Grande.

Grandstands 6 and 8 are either side of the chicane, putting you in the midst of the action. Whether a driver is sizing up a move at the end of the straight, or the carnage of turn 1, action is guaranteed.

Further around the lap, the next grandstands 9 and 10 are at the second chicane, the Variante della Roggia. This corner is at the end of the long Curva Grande section of the track, where cars reach speeds of around 330km/h.

These grandstands offer a view of the cars swinging around the tight chicane, which is also a great overtaking opportunity for any driver who’s brave enough. It was a key location for the race in 2019, when Charles Leclerc pushed Lewis Hamilton to the very edge of the circuit. Lewis complained, Leclerc was slapped on the wrists, but managed to hold on for a memorable victory.

This section of the circuit is also unique in that it’s somewhat secluded from the rest of the circuit. These grandstands, surrounded by the forestation, really remind you that the race is taking place in the midst of a national park.

The third sector features the third chicane of the circuit: the Variante Ascari. Names in honour of the Italian driver who lost his life at this spot in 1955, it’s a mich wider chicane taken at higher speeds than the previous two. That doesn’t make it any less chalanging, however.

In 2019, Sebastian Vettel fell foul of the turn and oversteered onto the grass. This triggered an extraordinary set of events that left the Ferrari fans in the stands shocked. As Vettel rejoined the track, he didn’t see the bright pink Racing Point of Lance stroll. Clipping Stroll’s car, Vettel was deemed to have rejoined unsafely and was handed a 10-second penalty. As Stroll looked to rejoin, he also did so unsafely, and a drive-through penalty was handed out for the Canadian. But it was Vettel who really suffered, as this resulted in a dire race in what would be his final home jaunt for Ferrari.

These stands offer a great view of the cars hammering down from the final DRS zone, so many will shape up for an overtaking move as they reach the braking zone.

Slightly further on from the chicane, the circuit flows into the long back straight. With the cars running the lowest downforce setups they can afford to run all year, this is where the cars will look to get the perfect exit to build up to max speed.

You will also have great views of the Ascari chicane on the right, so you won’t miss out on any action. Grandstand 20 is significantly further along the track than 18, so views of the chicane are a little more distant, but the cars will reach a higher speed as the pass you.

As the cars reach the conclusion of the back straight, the track is lined by grandstands on both sides. On the outside, stands 21 (a – e) and 22 are in a great position to see if anyone has made the most of the slipstream to make a move into the legendary Parabolica. GF10, 11, 12 and 13 are on the inside of this corner, behind general admission zones.

Max Verstappen’s travelling army of fans have been known to set up in stands 21 and 22, bringing with them a huge party atmosphere and pumping music.

As the cars emerge from the Parabollica, stands 11, 23a and 23b catch the cars building up speed once again. Action here in 2020 includes Charles Leclerc’s big shunt into the barriers that put an end to his race. Grandstand 23 also overlooks the pit entry, so you can get a look at any damage a car might have picked up as it slows to come in for repairs.

Lining the pit straight, this is where to sit to catch the close battles over the line. Grandstands 26 – 30 are smaller stands, and very popular with fans, as they are close to the podium. This should give fans a good opportunity to secure a prime spot on the circuit for the podium celebrations.

Grandstands 24 and 25 are larger stands right next to them. You’ll get a good view of the cars coming into the pits, as well as that chequered flag moment.

You can get a great view of almost every section of the circuit from general admission zones at Monza. All general admission areas are on the inside of the track, and Friday provides a chance for fans to wonder around and decide where they want to watch the action on Sunday. You’ll want to arrive early on race day to secure your spot, with areas at the Curva Granda and two Lesmo corners popular.

You can also get infromt of the grandstands at the entry of the Parabolica, with stone bleachers lining the wide corner. A tip from us: if you’re desperate to get on the circuit, there’s a gate that opens in the middle of Parabolica after the race to let the fans run on to the track.