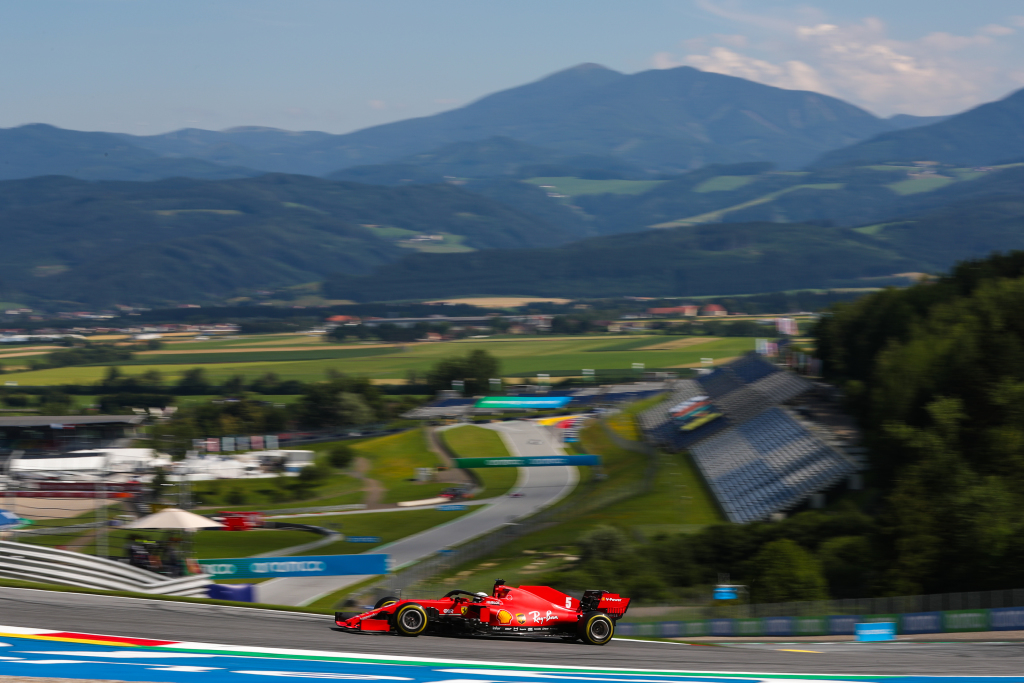 14 Jan 2022 Will Longman
Austrian motorsport's home is the Red Bull Ring. Read how the circuit in Spielberg became the beloved home of F1, MotoGP & DTM in the region

The Red Bull Ring is truly a circuit for the fans. It’s a short, fast-paced circuit that offers high speeds, tight racing action, and an unmatched atmosphere. It has delivered epic Austrian racing action across various series for decades.

But how did this small track in a quaint, remote area of Austria become a symbol for ferocious racing and wild celebrations?

From its humble beginnings as the only purpose-built race track in the country, its speeds quickly led to it becoming a danger for the drivers. But two rebrands and a major reconstruction later, it’s one of Europe’s leading race tracks.

Entering the 2022 season, it will introduce an exciting new layout in motorcycle racing to improve racing and safety, and hold a homecoming for a world champion in Formula 1.

Read about the history of this famous circuit, before checking out the options to be at a race in Spielberg with ticket and camping options.

The very first racetrack in Austria followed the lead of Silverstone, by basing it at an airfield. The Zeltweg circuit was a very simple one: four turns and four straights in an L-shaped configuration. It hosted just one championship Grand Prix in 1964, which was won by Lorenzo Bandini for Ferrari. He completed 105 laps of the 3.1km circuit in 2 hours and 6 minutes.

Ten years later, having hosted numerous sportscar races, the track was abandoned. However, since 1997, it has hosted the AirPower show annually, featuring air acrobatics and stunts. But just down the road, the Austrian motorsport heritage it began, powers on…

Austria’s first purpose-built racetrack was the Österrichring, built in 1969 to replace the Zeltweg airbase, which was nowhere near as exciting as other Grand Prix venues. It was flat, basic, and boring. But just across the street, a completely different beast was being unleashed.

The Osterrichring had changes in elevation, wide corners to navigate, and was generally high-speed throughout a lap. It features an obtuse first turn at Hella-Licht that rose through a flat-out kink towards a looping third bend. Power down the Valvoline straight towards another wide turn – Bosch Kurve. From there, drivers descended the hill through a sequence of fiddly high-speed sections which could be taken in 4th gear.

Formula 1 made its first visit in 1970, when Jacky Ickx took victory from third in his Ferrari, finishing just six-tenths of a second ahead of his teammate after 60 laps. Naturally, this disappointed the Austrian fans, whose countryman Jochen Rindt qualified on pole position, but retired on lap 21 due to engine issues.

Racing continued at the Osterrichring through the 1970s and 80s.  Those Austrian fans had to wait until 1984 before they could celebrate a home win, when Niki Lauda stormed to victory. His McLaren finished 23 seconds ahead of Nelson Piquet’s Brabham, and pushed Lauda to first in the drivers’ championship – a lead he would not relinquish.

But throughout the Osterrichring era, the speeds of the track increased dramatically. Rindt’s pole position time at the first race in 1970 was 1:39.2. By 1987, Nelson Piquet had knocked off 16 seconds around a circuit that was just 6km.

This came with its dangers. In 1975, Mark Donohue lost control of his car at the challenging first turn and died after crashing his car at high-speed. To slow the circuit down, a chicane was introduced, transforming turn 1 from the fastest corner on the lap to the slowest.

Though it was 1987 that proved to be the pivotal year Osterrichring would hold a Formula 1 race. While the circuit’s rural location provides a stunning backdrop, it presented the drivers with some unusual challenges of nature.

During the race, Stefan Johansson’s car struck a wandering deer that had strayed onto the track at a blistering 140mph. Johansson survived, but the Osterrichring would not, and it was removed from the next season’s calendar amid safety concerns.

Return to the calendar

While F1 vacated the track in the early 90s, Superbike and GT racing continued. Eventually, growing safety issues led to a complete reconstruction of the circuit. Hermann Tilke took charge in what was his first major track design – he’s now been involved in the design of ten of the 2021 F1 calendar’s tracks.

He replaced three of the wide high-speed corners with tighter, acute turns. This increased overtaking opportunities, while maintaining the high-speed straights and high-downforce middle sector.

There was good competition in these races, with five different drivers sharing the spoils across its seven races. Michael Schumacher, Mika Hakkinen and Jacques Villeneuve all took victory on the way to championships in Austria, as did Mick Doohan in MotoGP.

Despite the positive reception for racing at the track, which was now much safer and more exciting, it wasn’t more viable. Bernie Ecclestone cancelled the track’s 2004 contract when it emerged the Austrian government supported the EU’s anti-tobacco advertising initiative.

The track was bought by Red Bull’s Dietrich Mateschitz, who at the time sponsored the Sauber team and was two years away from purchasing Jaguar Racing to form his own team.

After various legal battles and years without any racing, Mateschitz embarked on a revival. New pit buildings and grandstands were in the offing, while the layout of the track would remain largely the same.

DTM was hosted at the circuit in 2011 (and has remained on the calendar ever since), and Red Bull – which now had a fully-fledged team in the championship – informed the FIA the track would be available for a Grand Prix.

This call was answered in 2014, when F1 action returned. Nico Rosberg took the race win from pole position, while Lewis Hamilton managed an impressive race finishing 2nd from 9th. But Red Bull wouldn’t find success at what was a new home race for the team, when reigning world champion Sebastian Vettel was retired with engine issues on just the second lap.

It wouldn’t be until 2018 that the circuit’s namesake team would take victory. Breaking Mercedes’ string of victories, Max Verstappen won three Austrian Grand Prix in 2018, 2019 and 2021 – plus the 2021 Styrian Grand Prix to boot. Not only was this a win for the Austrian team, but a de facto home race for the Dutchman, which attracted hordes of fans in Orange from the Netherlands.

Bikes returned to the newly-rebranded circuit from 2016, hoping for higher attendances compared to its previous stint in the 90s. While the audience grew, it suffered from similar criticisms around safety. The high-speed straight and kink at turn 2 led to major crashes around the top of the hill in 2020 and 2021. To counteract this, the first major change to the track since 1996 is expected to come into force in 2022. By adding a slow chicane at turn 2, bikes will now be forced to reduce their speed before taking on the tight turn 3.

The Red Bull Ring has been loyal to Formula 1, hosting the opening two rounds of the pandemic affected 2020 season, with another double-header in 2021. As long as the Dutch army continue to show up, races can be expected to take place in Spielberg.

As they have, and the atmosphere has built, fans from across the world have begun to see the Austrian Grand Prix as a bucket list race.