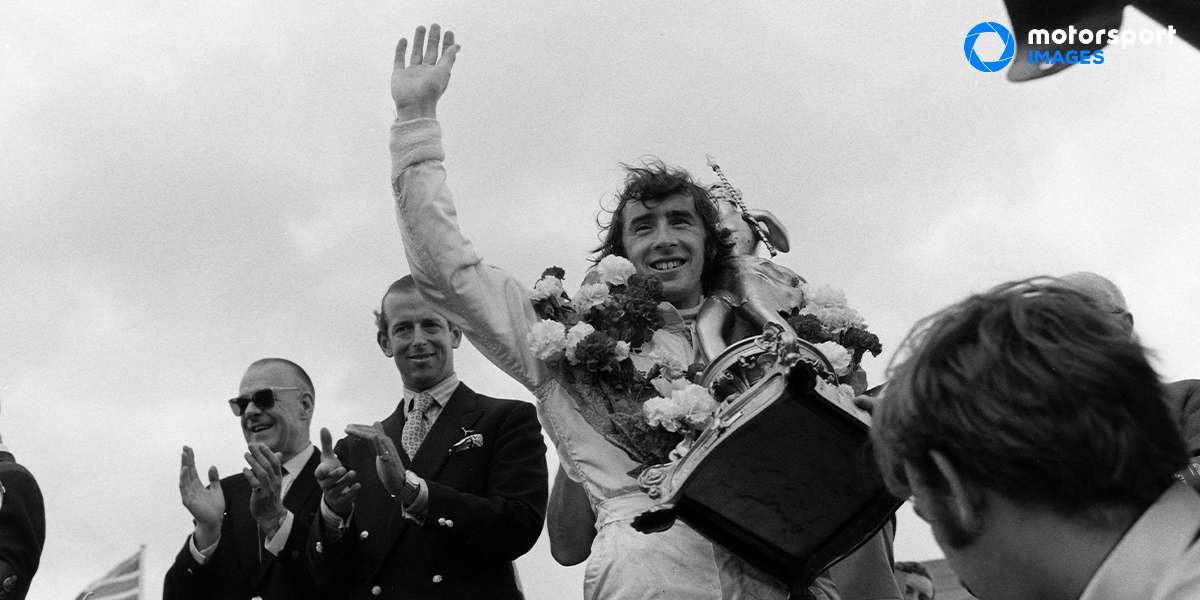 Will Longman 13 January 2021
Jackie Stewart is one of the all-time Formula 1 greats. Read about his illustrious career, including his wins as a driver and team manager.

Jackie Stewart is one of the true greats of Formula 1. He won three drivers’ championships ran a race-winning team, saved lives pushing for fundamental safety changes. But away from the track, he is also embarking on a mission to save more lives with his important charity work.

In February, Sir Jackie Stewart will join fellow champion Damon Hill for a one-off event in partnership with Motorsport Tickets. The two champions will sit down with Ignition Performance to discuss what it takes to climb to the summit of the world’s greatest motorsport. Proceeds to the event will be donated to Sir Jackie Stewart’s charity Race Against Dementia, and the halow project. Tickets are available to book now.

Ahead of the event, we look back on Jackie Stewart’s illustrious career. Delving back through the Motorsport Images archive, we’ve picked ten photos from The Flying Scot’s career from moments that made him the icon of F1 he is today.

Jackie Stewart’s first professional Formula 1 contract was with BRM, alongside the great Graham Hill. While he made his F1 debut in a non-championship race for Lotus the year before, his first championship race came in South Africa. While Jim Clark lead from the flag to the finish, Stewart impressed on debut, finishing 6th and rounding off the points.

It didn’t take long before Stewart was standing on the Formula 1 podium. At the next race, Hill led for the majority of the race and took the win, while Stewart qualified and finished third. Stewart would go on to finish second on three of the next four races, and was sat in an impressive third place by the 7th of the season’s 10 races.

During his podium streak in Formula 1, Stewart made his first and only appearance in the Le Mans 24 Hours. It was the second time BRM entered the endurance race, and Hill and Stewart would race the Rover 1992cc Turbine. Over the course of the race, the pair completed 284 laps finishing 10th on track, and 2nd in their class.

Stewart’s first win in Formula win came towards the business end of his first season at the Italian Grand Prix. It wasn’t a straight-forward win, however. Stewart qualified third, behind the Lotus of Jim Clark and Ferrari of John Surtees. To the disappointment of the Italian crowd, Surtees retired on lap 34 with a clutch issue. This lead to a three-way battle between Clark, Stewart and teammate and championship leader Hill. Between all four Brits over the course of the race, the lead swapped 42 times, which is a record in a Formula 1 Grand Prix.

With just two laps to go, a fuel pump issue struck Clark’s car, gifting Stewart the lead. It was expected, as was the custom, that the Scot would allow his teammate to pass and take full points in the championship. However, Hill struggled for grip on the approach to the Parabolica – the final corner on the final lap. He was left bouncing over the grass, and Stewart took the flag for his memorable first win.

Stewart made his debut in the Indy 500 the following year, in what was very much a Battle of the Brits. Stewart started on row 4, ahead of Graham Hill and behind Jim Clark. After Mario Andretti led the first 16 laps, Clark and American Lloyd Ruby swapped positions for the lead throughout the race. That was, however, until Stewart inherited the lead on lap 151. He held the position for 40 laps until, just ten laps short of victory, an oil pressure problem left his car for dead. Graham Hill took the lead for the first time, and took the chequer.

Just two weeks later, Stewart had a lucky escape at the Belgian Grand Prix. It was a wet race, and more than half the field crashed out on the first of the 28 laps around the 14km Spa-Francorchamps. Stewart, who started 3rd on the grid, was among them. His BRM crashed into a telephone pole and landed in a ditch by the Masta Kink, which was about as far from the pits as you could get. It left him upside down, knee-deep in fuel for 25 minutes. Hill and Bob Bondurant – who had also crashed out – came to the rescue with the help of a spectator’s toolkit. When extricated, he was placed in the back of a pick-up truck before an ambulance drove him to the medical centre.

It was this accident that spurred Stewart’s efforts to strive for better safety in Formula 1. As his reputation in the sport grew, he became a driving force in safety. His campaigning led to the usage of mandatory seat belts and full-face helmets, and also lef the drivers’ boycotts of races at Spa and the Nurburgring over safety concerns.

After four seasons in Formula 1, which included a 3rd and 2nd place finish, Stewart was crowned World Champion for the first time in 1969. Winning six of the 11 races, including his first British Grand Prix victory, he convincingly took the championship over closest rival Jacky Ickx. Two more championships followed, for the Tyrell team he raced for in Formula Three, in 1971 and 1973.

Stewart retired following his ’73 championship win, and turned his attentions to other ventures. This included becoming a consultant for the Ford Motor Company, continuing his safety advocacy, but notably a career in broadcasting. He acted as a host and commentator for F1, Indycar and NASCAR races, and even commentated at two Olympic events: the Luge at the 1976 Winter Olympics, and Equestrian at the 1976 Summer Olympics.

But in 1997, the Stewart name made a return to Formula 1. Partnering with his son Paul, Stewart Grand Prix made its first entry at the Australian Grand Prix. The team scored few points, but did enjoy an early podium with Rubens Barrichello finishing 2nd at the ’97 Monaco Grand Prix.

Stewart Grand Prix’s greatest race was surely the 1999 European Grand Prix at the Nurburgring. The race was a strange one. The start was aborted, and so drama ensued before the race had even got underway. When it did, the unpredictable weather of the Eifel region of Germany played its part. Mist, fog, showers, thunderstorms, and sunny spells were forecast for the race. While the field struggled with the conditions, Johnny Herbert and Rubens Barichello – who started 14th and 15th – kept their cool and quietly made their way through the field. By the end of 66 laps, Herbert found himself on the top step with Barichello in third. Stewart represented the team on the podium for its only win, before it was later sold to Jaguar.

In 2014, Sir Jackie’s wife Helen was diagnosed with frontotemporal dementia. With his knowledge of how Formula 1’s teamwork and innovation can drive change on-track, Jackie founded his charity Race Against Dementia, which aims to use Formula 1’s racing principles to find a breakthrough in research against the disease.

Fundraising events include charity auctions, sponsorship of the glamorous Amber Lounge Fashion Show at the Monaco Grand Prix, and an upcoming virtual event hosted with Motorsport Tickets. Titled ‘The Mindset of Champions’, Sir Jackie will sit down with Damon Hill, son of his old teammate Graham and a drivers’ champion in his own right, to discuss what it takes to become a champion.